Exhibition on Slovak State now online and in English

Those, who missed the Dream vs. Reality exhibition can view it online.

Art, propaganda and history about Slovakia during the years of 1939 to 1945 can be found online at sen x skutočnosť (Dream vs. Reality). The project of the Slovak National Gallery (SNG) which accompanied an exhibition of the same name is no longer running its exhibition, but an online version will be available in Slovak and English.

The web site has lots of texts, pictures, photos and audio shows what was happening in the Slovak State that was a satellite of then-Nazi Germany. This era belongs among the most complicated of Slovak history, the introduction of the web site reads.

]“We want a wide public to have the possibility to read this story,” stated SNG, as quoted by the SITA newswire. SNG believes that people from abroad will also read the texts. 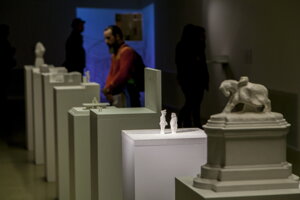 Those who did not visit the exhibition now have a chance to use a service at Web umenia (Web of art). This online catalogue of fine arts from Slovak galleries offers a virtual view of exhibitions with 360-degree panorama and zoom function.

The exhibition lasted from late October to February and was the both the largest and most complicated exhibition SNG has ever held. More than 40 galleries, museums, archives and owners of private collection across Slovakia collaborated to present 1,200 art pieces showing the status, appearance and function of art and propaganda during the Slovak State.

The art exhibition also displayed photos from the celebration of the 53rd birthday of Adolf Hitler in front of the national theatre in Bratislava, citizens heiling to the state anthem during Labour Day, anti-Jewish caricatures and drawings made by Jozef Fedor in a concentration camp.