The opposition is calling on him to do more. 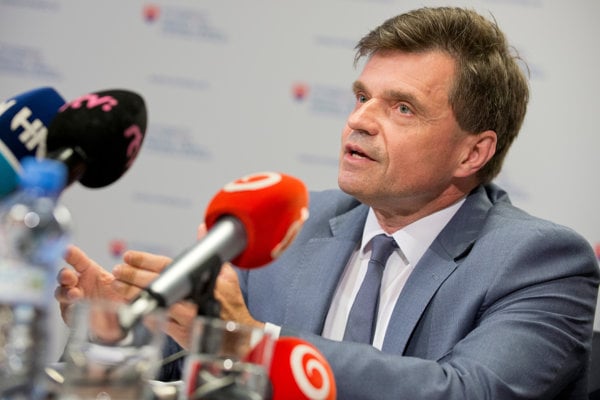 The Education, Science, Research and Sport Ministry will cancel a call for proposals for EU-funded projects in long-term strategic research and development and will issue a new one shortly, Education Minister Peter Plavčan announced on August 14.

Among its list of measures include the disbanding of the current evaluators in charge of gauging projects seeking EU funding and organising a new selection in September. The way in which projects are assessed will also undergo changes, said Plavčan, a Slovak National Party (SNS) nominee.

Plavčan said that he watched in incredulity as the issue of EU funds took on a political ring, and he was astounded by reports in the media last week. He was emphatic that the ministry has not paid a single euro towards the projects that emerged successful from the much-disputed call for proposals.

“The same day on which a letter, which I hadn’t received myself, appeared in a daily, I immediately halted the two calls for proposals,” said Plavčan. “Not a single euro has been paid out. Everything was stopped in good time to allow for a proper review.”

He also offered assurances that businesses which were successful in another call for proposals, this one to support new industrial research and development centres, will be required to present their plans to the public.

“If any doubts arise, the companies would do themselves a disservice if they did not pull out of the projects under such circumstances,” the minister said.

As for the warning letter that the European Commission has sent to Slovakia over the distribution of the funds, Plavčan said that Slovakia has received such letters before.

“But this was the first time that we’ve received such a letter following media reports,” said Plavčan.

He averred that he is not planning to step down.

“I have work to do, and whether or not I will resign is somebody else’s call,” Plavčan said.

Opposition wants Plavčan to do more

Veronika Remišová, MP for the opposition OĽaNO-NOVA, responded to the steps announced by Plavčan by saying that he has not done anything to dispel doubts looming over the two calls for proposals for EU-funded research projects and that he fahas iled to spell out how SNS will address the situation.

“He [Plavčan] would not comment on the single most important thing – what he’ll do to make sure that we use the €600 million judiciously and help Slovak researchers and businesses, instead of having to pay the money back to the EU budget,” said Remišová as cited by TASR.

“He didn’t give lie to the fact that many projects were assessed by unqualified evaluators or that the independent evaluators included senior officials from ministries under SNS’s remit. He also wouldn’t say what he plans to do about the outsized number of dubious companies with no revenues or employees that are set to receive millions of euros.”

Remišová asserted that contracts have already been signed with most of the businesses that were successful in the call for proposals.

“Notwithstanding his claims that not a single euro has been paid out, Mr. Plavčan knows full well that he’ll need to pay up because of the signed contracts,” Remišová said.

Background on the scandal

The ministry has been through several tumultuous weeks following reports of controversial allocations of EU funds intended for research that have prompted the opposition to demand Plavčan’s removal and that SNS lose its remit over the ministry altogether.

The controversy has had some carry-over effects on the coalition and is seen as a contributing factor to SNS chairman Andrej Danko’s decision to withdraw from the coalition agreement last week.

Meanwhile, the European Commission has suspended payments regarding four calls for proposals and enjoined the ministry to desist from closing new contracts with funding recipients.

In anticipation of new measures, the ministry is currently looking into the technicalities of the issue, which has also caught the eye of the European Anti-Fraud Office and Slovakia’s National Crime Agency.