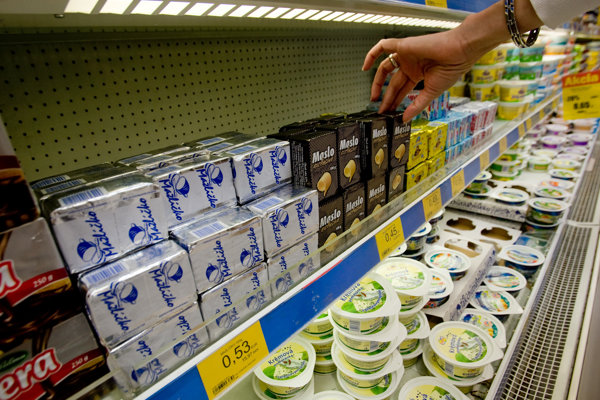 The price of butter has steeply increased in the past few months and is currently breaking records.

Customers in shops may pay as much as €2.80 for 0.25 kilograms, while some eight months ago the price was about one half lower. Food producers warn that the price may continue increasing and exceed €3, the Sme daily reported.

There are several reasons behind the increase. One of them is that in Slovakia and also other European countries less milk is being produced than in the past.

“If we compared it to last year, milk production in all Europe has dropped by 2.3 percent,” said Jana Holéciová, spokesperson for the Slovak Agricultural and Food Chamber, as quoted by Sme. “The butter in intervention warehouses was sold out, so its price went up.”

The imbalance in the market was caused mostly by the decision to abolish milk quotas two years ago. As a result, the market was flooded by milk from abroad and many producers had to close their business or decrease the number of dairy cows as they could not compete with cheaper milk from other countries. About 10 percent of producers disappeared from the Slovak market, Sme wrote.

Another reason is that people are not searching for cheaper margarines anymore and they prefer original butter. The third reason is summer, during which dairy cows produce less milk with less fat, Holéciová explained.

The Slovak Dairy Association expects the prices of dairy products, i.e. butter, cream and cheese, to continue increasing. The price of a 250-gram cube of butter may exceed €3.

“The prices may stabilise at the beginning of winter,” the association opines, as quoted by Sme.

It is not clear for now how retail chains will respond to the increase in butter prices, Sme reported.