Have you ever climbed a via ferrata?

In central Slovakia, there is one also suitable for beginners. Here are some of the views it offers. 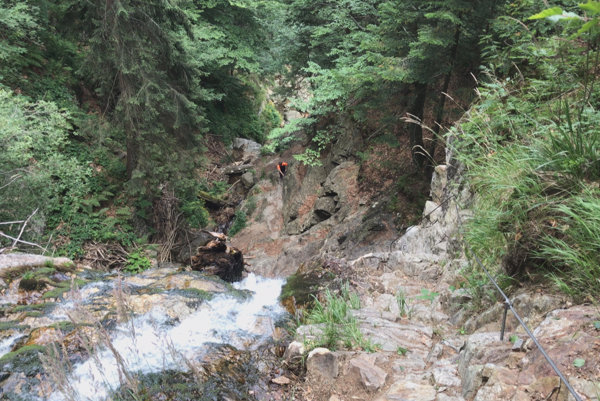 One of the most popular climbs to the Martinské Hole hill is the via ferrata, which has been open for four years.

Veľká Lúka towers above the Turiec region. Inhabitants of the regional centre, Martin, know it by the name of Martinské Hole or Martinky, because of the ski resort under the Veľká Lúka peak. But even in summer it is one of the most visited places in Malá Fatra: for hiking, cycling, or paragliding.

Ferrata to the top

Of the several path leading to the top of the hill, the ferrata has become the most popular among hikers in recent years. Ferrata is a protected climbing route in a more difficult terrain accompanied by steel cable suitable for mountain climbers.

Starting at Martin-Stráne, a city part reachable also by public transport, a path leads around the hotel and immerses itself into forest. The red mark firstly leads tourists through easy terrain until reaching the ferrata parts of the route.

To get to the beginning of the trail by public transport, take bus 40, 41, 42 or 44 from the centre of Martin to Stráne and get off at the last stop. By car, park at one of the two parking places: a smaller one near the bus terminal or a bigger one further to the hill. Both are free of charge.

The path leads up the Pivovarský Potok canyon and crosses it at several points via small wooden bridges. We counted twelve of them on the way up.

Going further, there are several relaxation zones on the way, with wooden benches and tables for a snack.

The lower part leads through the former stone quarry and it is still possible to find some of the structures in the forest together with an information board – mining carriages, the remains of rails or stone crusher.

Information boards indicate the point you are at on the route. They also provide some information about the nature around you and its animal inhabitants. The ferrata starts after the fourth point. A few metres before, there is another wooden bridge. Those who do not feel like climbing the rocks may still change their minds and use the bridge to follow the ordinary path up to Martinské hole. It is possible to use this path on the way up as well as on the way down while the ferrata is only a one-way route.

The ferrata starts shortly after the fourth point. This one belongs among the easy ones, starting with a section of A or B difficulty. The terrain is steeper and rocky. It is recommended to use proper climbing equipment – a helmet, sitting harness, energy absorbing lanyard in case of a fall, and gloves. However, none of the tourists we met were using equipment. 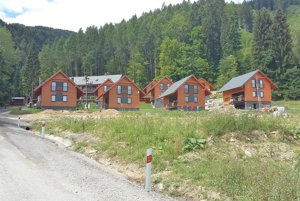 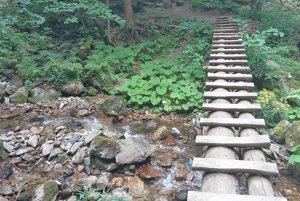 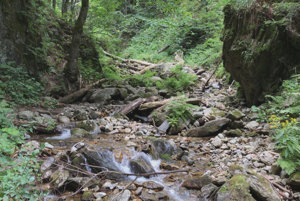 After a while of climbing a new part of the ferrata appears. It was added just in the current 2017 season. Two 12- and 13-metre-long suspended bridges at a height of about 10 metres. For those who do not feel like using the bridges, there is another possibility: the classic route continuing through the rocks.

Using a ladder and several other metres of steel cable while climbing, hikers reach the fifth point where the ferrata divides in two. The left one is shorter and easier, consisting only from parts with the easiest A and B difficulty. When choosing the right one, be prepared for harder climbing with several C parts.

It is recommended that you have special insurance for mountains, otherwise you have to pay the rescue yourself.

After some more climbing to the stream, the terrain changes to forest path again. Following it, you will reach cottages at Martinské hole in about 15 minutes. The whole ferrata takes about three hours to climb; however, it depends on individual skills and physical shape.

The ferrata is open during the whole year with the exception of three months: from April 15 to May 31 and from September 15 to October 31. Admission is free.