Editors and students complain about the lack of practical training at journalism schools and missing links with the realities of the media market. 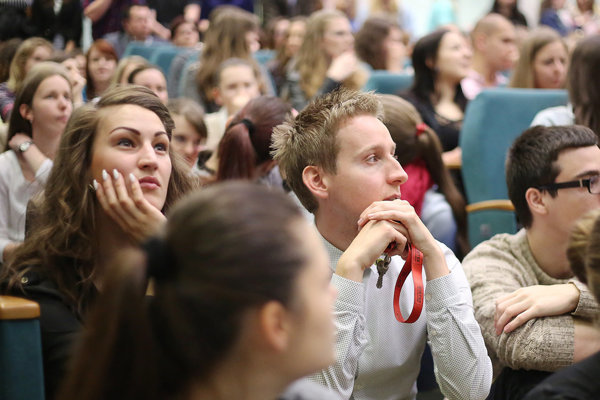 The need to accumulate more resources has been seen as the reason why universities accept too many students for their journalism programmes. (Source: TASR)
Font size:A-|A+

“Alternative media” and the hoaxes they produce populate an ever-larger space in the media, particularly online. Democracy watchdogs point to the need for professional and independent media among the essentials to cope with the situation.

In Slovakia, this has become an issue after one of the media schools invited the editor-in-chief of a known hoax-spreading magazine to speak at one of their conferences. The controversy raised questions about journalism education, including if aspiring journalists will be well-prepared to face propaganda and fake news.

Media professionals admit that education at journalism schools hardly reflects this role that their future graduates will need to fill.

“I’m missing a link to reality at Slovak universities”, said Matúš Kostolný, editor-in-chief of the Denník N daily. “The media environment has rapidly changed, and it seems that universities have not had enough time to notice”.

Pravda daily’s editor-in-chief Nora Slišková lists the poor-quality learning process, too many journalism departments and too many graduates, the lack of lecturers with practical experience in journalism, and undersized financial support for traineeship programmes as what she calls “the reasons why educating young journalists proves deficient”. 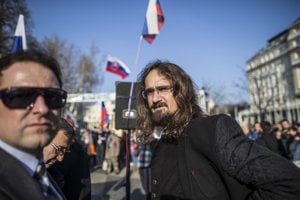 We have a problem. No, we don’t

None of the universities who responded to The Slovak Spectator’s questions see any issues in terms of the education provided to young journalists, apart from insufficient technical equipment at some media or journalism departments. They also complain about the preparedness of the students before reaching the university level – and a lack of money.

“A percentage of high school students come in with inadequate knowledge, missing the general overview of current issues as well as possessing weak language and stylistic skills that are crucial for future journalists”, noted Jarmila Jurová, vice-dean at the Faculty of Arts at Constantine the Philosopher University (UKF) in Nitra. She also admits they would need more financial resources to secure more efficient links between theory and practice.

The need to accumulate more resources has been seen as the reason why universities accept too many students for their journalism programmes. The per-capita system applied in the education system motivates them to do so. Samo Chrťan, who has studied journalism at Comenius University in Bratislava, noted for The Slovak Spectator that the number of journalism students was simply too high for lecturers, who were, as a result, unable to approach students individually.

Students mostly complain about the lack of practical training they receive during their journalism studies.

‘A number of subjects are theoretical and unnecessarily instructed in-depth”, says Lucia Kučerová, a journalism student at UKF. “Although we can participate in the university magazine Občas Nečas or Plus radio, I’m missing the link between my studies and actual work experience”.

Many journalism schools tend to focus on Slovak grammar and style very intensively.

“I polished up my Slovak, which I consider a plus”, said Peter Dudovič, who holds a degree in media communications from Pavol Jozef Šafárik University in Košice. However, he also mentions the lack of practical training at school. “I learned more in the radio studio at university than from the theory taught”.

Chrťan noted that most students are more or less dissatisfied with the programme.

“They complain about memorising dates for exams, the theoretical approach which is based on out-of-date literature”, Chrťan told The Slovak Spectator. But he does appreciate the fact that there are experienced professionals among the lecturers at Comenius, among them reporters Peter Kubínyi, Martin Strižinec, and TV news anchor Ľubomír Bajaník.

Also, students have easy access to traineeships, according to Chrťan, and several opportunities to apply their skills in university media platforms, such as RádioAktív, WebJournal or OFF Record discussions. Those could work more professionally if changes occurred, Chrťan noted.

Still, university media across the country thrive even without professional guidance. Well-equipped university media is one of the advantages of studying journalism at Catholic University in Ružomberok, along with the very few number of students in the programme, says student Zuzana Janíková. However, lecturers who lead the university’s media sign only one-year long contracts, and as a consequence they cannot adequately work with students, she noted.

“Also, the board at the faculty is not interested in university media at all – a computer, in the radio studio, has broken down, and we do not have money ourselves to pay for a new one”, Janíková told The Slovak Spectator. “If we don’t get the money, we will not broadcast”.

“Many part-time students work in the media industry, and this kind of study contributes to gaining more knowledge from journalism theory and broadening their practical skills”, said Jurová.

Statistics on how many part-time students actually work in the media while studying for their degrees remain unknown.

Prešov University is one of those that currently offer only full-time programmes.

“Our goal is, therefore, to steer our capacity towards the young generation of journalists-to-be”, explained Vasil Gluchman, dean of the Faculty of Arts at Prešov University.

Svetlana Hlavčáková, head of the Journalism Department at Comenius University, explained that they do not intervene in their full-time students’ activities unless it collides with their lectures.

“In their free time – Friday – they can intern in media”, explained Hlavčáková.

The private Pan-European University, on the other hand, claims they support their full-time students who work as interns by creating an individual study plan for them.

“Internships announced to the university by media organisations are offered to students”, said Iveta Radičová, dean of the Faculty of Mass Media at the university. Her school has signed contracts with News and Media Holding, IBM, DELL, and is working on others.

Few contracts with the media

While not all of the journalism schools have signed contracts with media outlets, internships are obligatory for students. Comenius does hold contracts with the public-service broadcaster RTVS and the TASR newswire.

But while the media industry flourishes in Bratislava, things are more complicated for students in other regions.

“In the east of the country, the media environment is not developed that much”, Gluchman explained. “Subsequently, there are less traineeship opportunities”.

Pravda’s Slišková admits they do not have any contracts with universities.

“Students themselves get in touch if they are looking for a traineeship”, she said, adding that most of their interns come from Masaryk University in Brno, Catholic University in Ružomberok, and Constantine the Philosopher University in Nitra.

“We are trying to search for talented students”, Kostolný said.

The British system could be an inspiration

For now, editors are left to rely solely on their own judgment and test the aspiring reporter on the job.

“I have an interest in a student, not in the school they graduated from”, concluded Slišková.

In Slovakia, there is no official and clear system that would differentiate high-performing journalism schools from bad ones. In the UK, for example, apart from The Quality Assurance Agency for Higher Education that decides on a university’s ability to award degrees, there is the National Council for the Training of Journalists (NCTJ), a charity governed by a board of journalism-experienced members that accredits high-quality education and training providers as well as offering professional qualifications itself.

“Most regional media organisations and many national organisations require an NCTJ qualification for employment, because they know that NCTJ-qualified journalists will be able to do the job”, Michelle Lewis from the National Council for the Training of Journalists told The Slovak Spectator.