Education minister steps down following Fico’s call, Danko not ruling out he might leave politics. 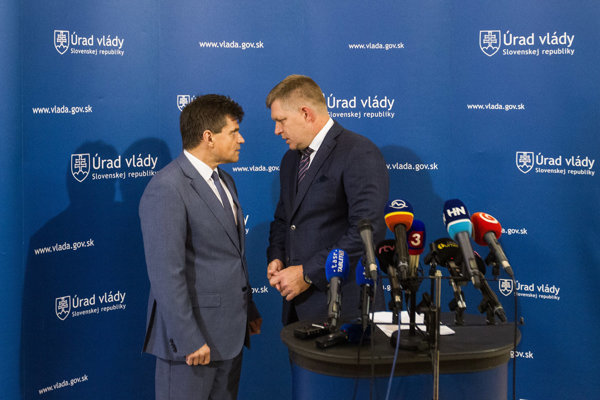 Slovakia’s summer coalition crisis is over, most political analysts agreed after Prime Minister Robert Fico announced his demand for the education minister’s resignation.

“None of the ruling coalition parties can afford to gamble with the public trust like this,” Fico told journalists in his three-minute speech on August 16. While noting that he did not want to make accusations, he said that “shadows of suspicions linger”.

Fico was referring to the corruption and cronyism allegations surrounding the Education Ministry and the way it distributed EU funds for research and development. 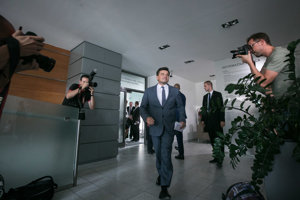 Andrej Danko, leader of the junior coalition partner Slovak National Party (SNS), saw Fico’s announcement on television during his interview with the Týždeň weekly, just as he was saying he is not ruling out Peter Plavčan’s resignation, but needs to discuss it within his party some more.

“Danko stopped mid-sentence, looked at the screen and stood up,” Týždeň’s reporter Michal Magušin told the Sme daily. “Then he said Fico double-crossed him, a trap Fico had been setting up all along.”

Political analysts generally do not expect the crisis to result in early elections or in the fall of the government. The frequently voiced view on the most recent events is that Danko’s lack of experience in politics caused his loss against Fico.

“I have announced to the SNS leadership that I would consider how and if I should go on in politics,” Danko told the press after he conceded that Plavčan would resign on August 17. He branded the whole situation a “disappointment”.

“After thorough consideration I have resigned from the post of minister, because the things that have happened in recent days have crossed all lines,” Plavčan commented as quoted by the Sme daily. It is not yet clear whom SNS will choose as a replacement.

The parliamentary opposition were about to file a motion for a no-confidence vote in the education minister on August 18. The opposition leaders welcomed Fico’s call on Plavčan to step down but called it insufficient.

“This confirms that this government has been and will remain a government of scandals,” independent MP Miroslav Beblavy said and noted that Plavčan’s resignation is coming too late.

Freedom and Solidarity (SaS) leader Richard Sulík responded that he now expected Interior Minister Robert Kaliňák and Labour Minister Ján Richter to resign next. SNS is also demanding the resignation of Richter, a minister of Smer.

Veronika Remišová of Ordinary People (OĽaNO) called for the EU funds scandal to be resolved “immediately”, because the time to make sensible use of €600 million for research is running short.

Yet Danko and Plavčan are denying all corruption allegations.

Where will the coalition talks lead now?

Fico’s announcement that he was no longer willing to tolerate Plavčan at the helm of the Education Ministry came after a sequence of postponements for the next coalition meeting, where Fico, Danko, and Béla Bugár of Most-Híd were expected to discuss the new coalition agreement and the demands Danko’s SNS brought forward.

On August 16 the cabinet ministers met for their regular Wednesday session at the Government’s Office, in what Justice Minister Lucia Žitňanská labelled a “working” atmosphere. Prior to the session Fico held his press conference where he demanded Plavčan’s resignation. Plavčan did not attend the session.

However, the coalition crisis is unlikely to end in the fall of the government or even early elections, observers say.

Most-Híd refused any notion of early elections, and neither of its two coalition partners alluded to such an option. Not even Danko, who admitted to finding himself in a complicated political situation.

“This government has not fallen,” he told journalists on August 16. “The withdrawal from the coalition agreement means we wanted to fix the relationships between partners.”