The award is not only a big thank you gesture but also a call for everybody to forget about their comfort and think about how they can help the world become a nicer place, said the Slovak president. 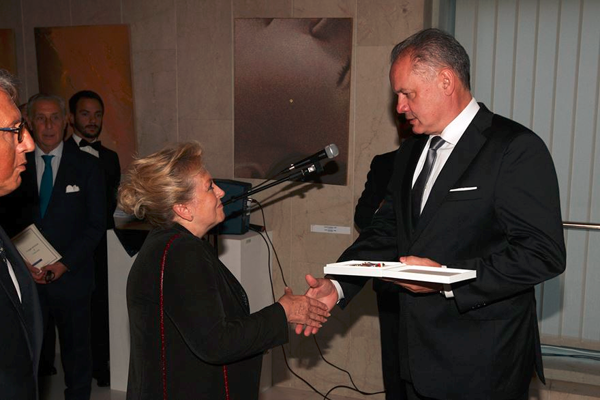 President Andrej Kiska granted a state award in memoriam to Carlo Orlandi for saving 500 Jewish refugees in the Aegean Sea during World War II, 260 of whom were Slovaks.

The Medal of the President of Slovakia was given to his grandchildren in late September 2016.

The award is not only a big thank you gesture but also a call for everybody to forget about their comfort and think about how they can help the world become a nicer place, Kiska added.

During his visit to Italy, the Slovak president met with his Italian counterpart Sergio Mattarella and President of the Italian Senate Pietro Grasso. He also attended the opening of the exhibition of Slovak Gothic art titled “The Treasures of Slovakia”.
At meetings with top Italian representatives, Kiska stressed that “Italy is a country that is not only a partner, but also a friend”.
“It is a country we share a lot with,” the president added, as quoted by SITA.

Moreover, it is a country for which the migration crisis is an everyday reality.

“In my talks with President Mattarella, we discussed a lot about how to face the migration crisis,” Kiska said, as quoted by SITA.

In his opinion, it is important to assure people that things are under control and there is no danger.The president stressed that the European Union is not only about business, but also about solidarity.

“It is our moral duty to think not only about people escaping death but also solidarity within the EU,” Kiska continued, adding that the refugees coming to Italy are the refugees of us all. “The EU will certainly handle this problem together.”