Imrich Gablech received several Czech and foreign awards and medals. On the occasion of his 100th birthday he was promoted general. 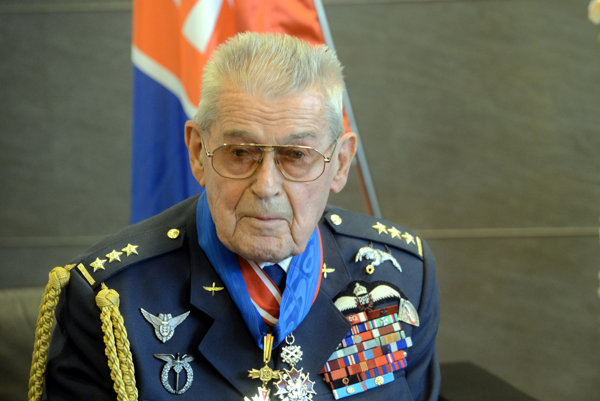 General Imrich Gablech, one of the last Czechoslovak pilots who served in the British Royal Air Force (RAF) during World War II, died in mid-December 2016 at the age of 101 years.

Gablech was born on November 4, 1915 in the Slovak village of Hrachovište (now in Trenčín Region). His parents wanted him to become a priest, but he had other plans. He started visiting the air school in the Czech town of Prostějov in 1937. After the establishment of the Nazi-allied Slovak state, he flew to Poland in June 1939.

After the Soviet Union participated in the attack on Poland, Gablech was captured and sentenced to five years of forced labour for espionage, the TASR newswire reported.

When the Nazis attacked the Soviet Union, he was released from the labour camp and together with other Poles departed to the United Kingdom, where he joined the RAF.

His serious health problems did not allow him to pursue the career of a pilot, so he was trained to become an aviation controller. By the end of WWII he served at the Coltishall airport, close to the city of Norwich, TASR wrote.

He worked as a controller after returning to Czechoslovakia, but was dismissed in February 1949, similarly to other “westerners”. He could not find a job for a long time, so he worked as a manual labourer, TASR reported.

In 2005, a biography about him was released in Slovakia, titled “Hallo, Airfield-control, go ahead!”.

Gablech received several Czech and foreign awards and medals. On the occasion of his 100th birthday he was promoted general.

He spent his last days in the Czech town Havlíčkův Brod, TASR reported.