Schӧner Náci has a life-size statue in the city centre. 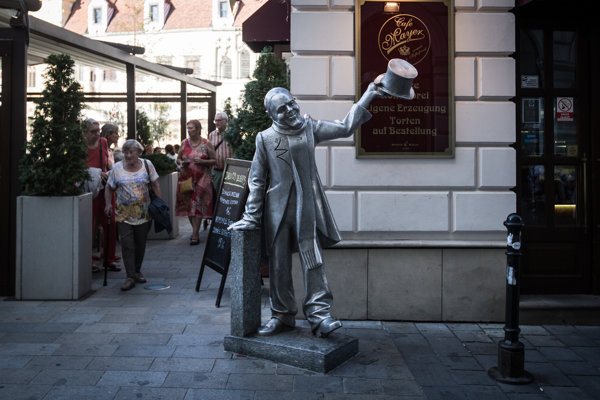 It is now 120 years since a unique character well known to the older inhabitants of Bratislava was born. Ignác Lamár, nicknamed Schӧner Náci, became an unforgettable figure thanks to his outfit and exceptionally good manners. A life-size statue of Lamár, the work of Juraj Meliš, now stands near the Main Square in Bratislava’s old town and is a popular photo point for tourists.

Lamár was born on August 11, 1897, in the Petržalka borough of Bratislava. He was a shoemaker’s son and also learned this trade himself. When his mother left the family and fled with a lover to Vienna, his father started drinking heavily. After his father’s death, all of the family’s possession went to cover outstanding debts. Lamár got a job in theatre workshops but was sacked when the theatre fell into a crisis during World War I.

He started earning money with occasional small services: he cleaned flats and carpets and brought coal from cellars. He lived in various rented rooms and flats, taking with him a black suitcase with a tail-coat, black lacquered shoes, white gloves and a bowler hat which, Countess Náriová donated to his father after her husband’s death. One day, he donned all these garments, fixed his smile in front of a mirror, and took to the streets. He dreamed of being a clown in a circus and came close to achieving his dream.

He became a well-recognised person in the streets of Bratislava. He promenaded from Michalská Street to the Danube River, greeting people, especially women, in the three languages which were commonly spoken in Bratislava – German, Hungarian and Slovak – while also doffing his hat.

He died of tuberculosis at the age of 70 in 1967 in the village of Lehnice. In 2007, his remains were moved from Lehnice to a memorial grave in the Ondrejský cemetery in the Old Town.