Raslavice, the village where people know how to use the EU funds 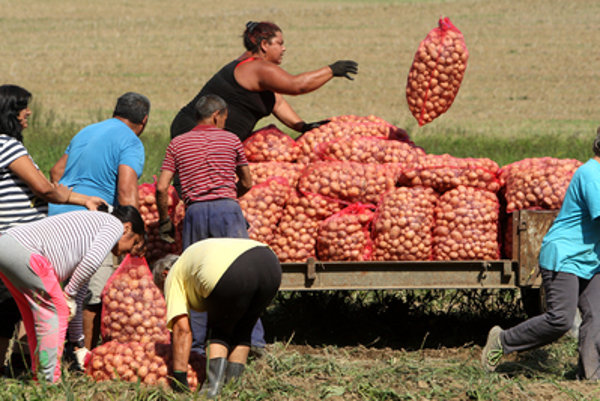 The production hall in the village of Raslavice is almost empty, but gradually filling with interlocking tiles. Roma labourer Jozef Szerdzig picks out concrete blocks from forms and hands them to two other Roma who wash and put them on pallets. They are skilled and do not even look at each other while working.

“I would like to repair my roof because it’s leaking,” Szerdzig explaining why he took the job from the village offered at the Labour Office. He looks shy and stares down during the conversation.

Szerdzig’s roof is actually not leaking but about a quarter of it has completely fallen. At first glance it is the most devastated house in a part of the village where most of the Roma live. He lives there with his wife and three children.

Although he has experience working for electricians, he has had a problem finding a job for a long time. The production of interlocking tiles is his first real full time job.

“We want to help exactly these kinds of people,” the new Mayor of Raslavice Marek Rakoš (Smer, NOVA) told The Slovak Spectator. 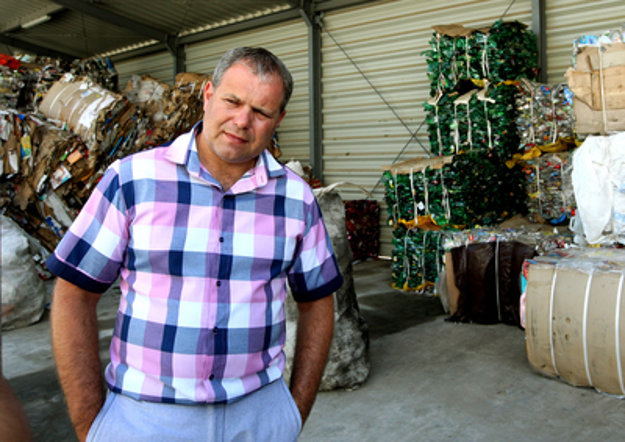 At the same time, Szerdzig agreed that part of his 436-euro monthly salary would be saved in a municipal office, which agreed to help him repair his roof before winter.

Szerdzig is just one of the many people whose lives mayor Rakoš is changing since his election in 2014. In two and a half years, this owner of a plastic windows company has built a day care home for retirees where they can spend time with neighbours instead of watching TV and a municipal company that is social enterprise growing vegetables, creating interlocking tiles and recycling waste. He also reconstructed a new nursery and school facilities, changed the pool to a wellness centre and built a community centre where Roma and the majority of people can get know each other.

By using eurofunds and state aid he thus created some 80 jobs in two years, decreasing Raslavice’s unemployment from 270 people to 190 out of the 2700 citizens living in the village.

“I didn’t like that the municipality gave contracts to others [private firms] instead of constructing these things by itself and giving jobs to its own unemployed people,” Rakoš said about his decision to run for mayor. 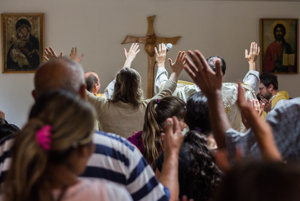 The Raslavice manor house reconstructed into a care home is almost empty since most of the clients have gone for a trip. This has not decreased the mood though and an overall good atmosphere prevails over the facility. While older pensioners are in the backyard or playing board games, some younger retirees are in the workshop and producing baskets. They look like wicker baskets, but in fact they are made out of glued paper rolled into twigs.

“Lidl [flyers] has the best paper. This Hornbach can’t really be rolled up,” laughs one of the clients. He pretends to be angry while crumpling up the paper and throwing it away.

The care home with capacity for 30 people was built by the mayor from the contributions of the Labour Ministry on the site of the former chapel of the St. Joseph monastery. Its employees serve warm meals to retirees and provide them with leisure activities. 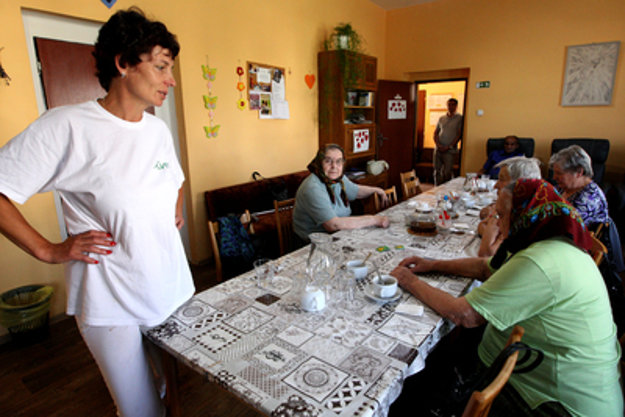 For one euro a day, they have a full-day program, bake waffles, make Christmas or Easter decorations, and go for trips. Five people are taking care of them, thus having full-time jobs.

“We all got used to each other, we talk and get lunch,” one of the care home’s clients, Helena Kašperová, told The Slovak Spectator. “Being at home is crazy, you only have the radio and TV, nothing else.”

Some retirees were reluctant at first, but after a while they realised it was good idea to exchange staying home alone for some joint activities instead, according to Martina Duraková, head of the care home.

“It has also improved the lives of their children, as they can go to work knowing that someone is taking care of their parents,” Duraková told The Slovak Spectator.

Some stationary clients probably do not even know they are part of a sophisticated plan on how to give work to unemployed people in Raslavice.

On the day The Slovak Spectator visited the village, they ate schnitzel with potatoes grown in the fields a few miles from the manor house. The potatoes were prepared by local cooks who also provide food to the local kindergartens under reconstruction. The reconstruction is being performed by a municipal firm with the help of long-term unemployed Roma, according to Viktor Guman, head of the local community centre.

After 17 years of work in the Bardejov regional labour office, Guman accepted a job in Raslavice to help unemployed people. He stated he was amazed by the mayor’s vision of what to do in Raslavice.

“He didn’t come in with one idea to give a job to his cousin or uncle, which is common practice here,” Guman told The Slovak Spectator. “He presented a bunch of ideas and said we are going to deal with it in a complex way.” 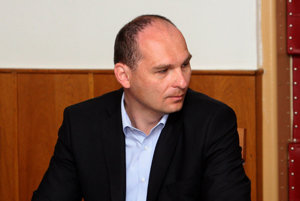 “What did you do with it,” one of the labourers says, approaching the the tractor with a broken potato harvester with a fallen chain. The machine belongs to Jan Škešňák, who runs local agriculture activities and is supervising the potato harvest in the field.

“I cannot understand why the state cannot help us with the tractor, but we have to use a private one,” mayor Rakoš says, shaking his head and watching the workers struggling with the broken machine.

Meanwhile about fifteen women take potatoes from the ground, throw them in red and yellow sacks, and wait for labourers with a second tractor to take them out of the field. It is hot so their supervisor gives them a few minutes to rest and drink. 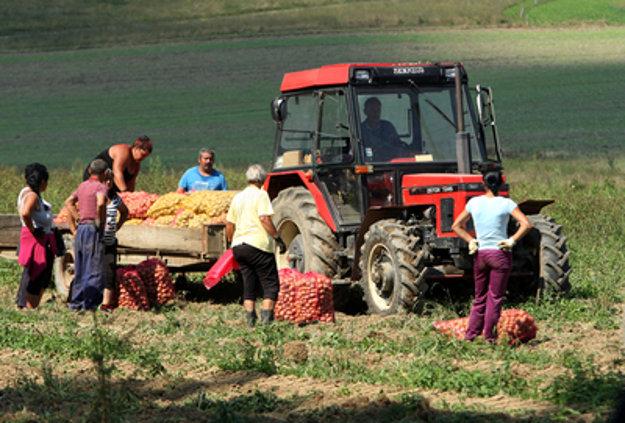 “So far, I’m happy with them. It was worse last year,” Škešňák told The Slovak Spectator about his subordinates, wiping his dusty hands. Most people working in the field are long-term unemployed Roma.

“A woman was able to harvest 100 metres by lunch in the past,” says Ščešňák, “Now it takes more than a week for them.”

He adds that he can see the difference between the generation of Roma mothers who used to work during Communism and the current generation comprised of their daughters. 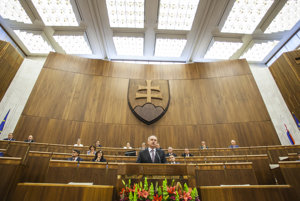 Growing crops is one of the Raslavice municipal firm’s activities and the mayor realizes that it cannot make a profit. Fifteen people in the field, two thirds of them being long-term unemployed without working habits, cannot compete with five harvesters on hundreds of hectares belonging to private companies.

“The state is spending money on promoting the buying of domestic products,” says Rakoš. “At the same time, schools and hospitals don’t want to buy local food products from the social enterprises grown without chemistry.”

To avoid being in the red, Raslavice’s social enterprise also does construction work in addition to agriculture. At the same time, the municipality bought a waste recycling machine by using a state support programme. 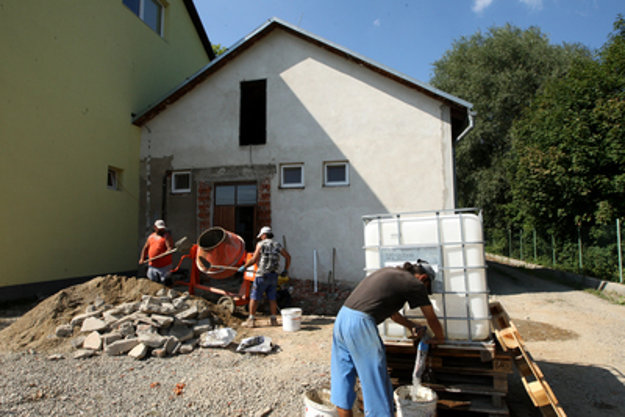 Raslavice made a deal with 21 municipalities in the region to collect their waste, including papers, glass bottles and plastics. Long-term unemployed people then sort them into large bundles of raw materials and sell them to recycling companies.

Employing marginalized Roma is difficult though many Roma from Raslavice have at least some working habits from the past, according to Guman.

The municipality therefore wants to organize work courses for them in the new community centre. Their children can also have extra classes there. The centre is also for people from the majority and the main idea is for both groups to get to know each other.

“I see it as a mission,” Rakoš answering the question as to why he exchanged a prosperous company with dozens of employees for being a mayor trying to build a self-sufficient village. He admits that instead of travelling and begging potential clients to buy his expensive vegetables, he could spend time with his family.

“There are no people willing to help in state administration,” Rakoš says. “I see that I have a gift and I should do something meaningful with it.”