SNS will not quit government

Andrej Danko, the head of the SNS party, after four days of thinking, has decided to stay in politics. 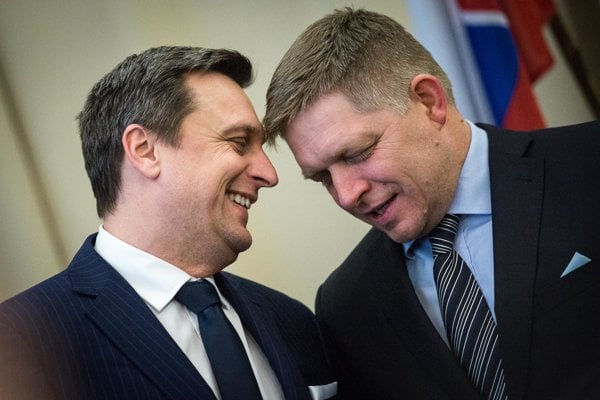 After two week of coalition crisis created by the Slovak National Party (SNS), the party’s chair, Andrej Danko, stood in front of the media and stated that the SNS wants to stay in the coalition with Smer and Most-Híd .

“The SNS is interested in remaining in the coalition but it needs to be a genuine coalition and not slavery,” Danko told the press. “If the government collapses, the only alternative is a caretaker government that wouldn't be able to acquire support in Parliament.”

The coalition crisis is related to the eurofunds distribution scandal at the Education Ministry which was led by SNS nominee Peter Plavčan and culminated when Prime Minister Robert Fico (Smer) asked the SNS to replace Plavčan. The Education Minister then resigned and Danko took a four-day-long vacation to think about his political future.

“In 18 months spent in politics, I've experienced criminialisation and ridicule,” Danko said. “I can imagine a life outside of politics but I refuse to give up at this stage.”

Danko further stated that he respects Robert Fico as a prime minister. “However, I want to make decisions about my ministers myself,” he said.

Danko, claims that the SNS chose to withdraw from the coalition agreement unilaterally in order to command more attention from its coalition partners but will remain in the coalition because it perceives no alternative to its governing role.

“We don't want to traumatise people with an [early] election, but I ask all SNS voters to understand that some processes within the coalition can't be tolerated any longer,” Danko said.