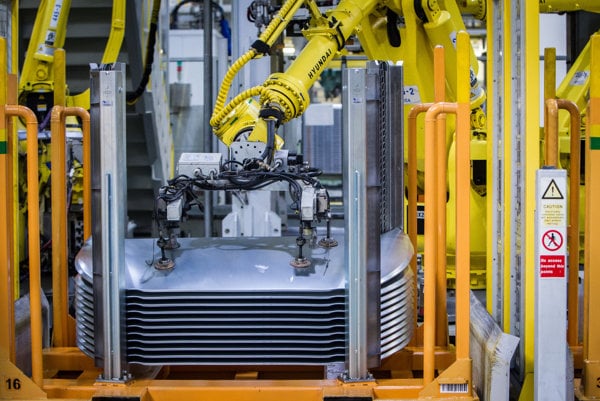 Imagine a digital image of a company that analyses and optimises the production process and use of technologies. This is the basic idea of the Digital Twin project, developed to ease the transition of companies to smart production, known as Industry 4.0.

“There is the wrong idea that companies will have to get rid of all production machines and devices and replace them with completely new ones, adjusted to Industry 4.0,” Martin Morháč, chair of the board of directors at Sova Digital, a company that developed Digital Twin, told The Slovak Spectator. He added that their solution helps increase the effectiveness of existing technologies in firms, with minimal investments.

In cooperation with the Engineering Faculty of Slovak University of Technology in Bratislava and Siemens, the firm developed a solution that should not only increase the productivity of existing processes but also remove certain problems in production, reduce costs and quickly respond to any changes.

The system creates a digital copy of the company in which that specific firm can optimise its operation during the production chain, change parameters and production processes as well as adjust the product to market demands.

Moreover, it collects the data to help create a comprehensive image of a specific product and its production. Since it continuously analyses the data and improves the operation of the production processes as well as use of technologies, it can detect any changes or discrepancies and respond to them.

“The biggest advantage is a quick payback period and permanent improvement in the operation of processes and the use of the company’s own sources,” he added.

Sova Digital is currently supplying its Digital Twin project to two companies. In one they deal with optimising the production line, while in the other they are using the system to optimise the operation of the company’s logistics.

Industry 4.0, or the fourth industrial revolution, represents extensive changes in the industrial sector relating mostly to the digitalisation and optimisation of production processes and services.

Most big companies are ready to start with the Industry 4.0 concept, according to Maroš Stano, the Economy Ministry’s spokesperson. In the case of smaller companies, this applies particularly to those linked with customers from countries that have already adopted some measures in connection with Industry 4.0.

The ministry seeks to inform young entrepreneurs about both the benefits and risks linked to the concept.

As for the preparedness of Slovakia for the fourth industrial revolution, Stano thinks that the country has the potential to supply technologies for smart production, prepared for implementation in a highly automatised environment.

“Slovakia needs to stimulate the implementation of key technologies in the entire production process and processing, as well as supply chains thanks to financial support, with the aim of helping the industry produce top technologies with a high added value,” Stano told The Slovak Spectator.

To improve the productiveness and competitiveness of companies, the Economy Ministry is currently trying to support innovations via various subsidies from the state budget and EU funds. It has already prepared an action plan to implement the measures and policies linked to smart industry.

The launch of Industry 4.0 will take place in several phases. Currently, companies are trying to learn more about it, while in the next phase they will try to improve their current technologies, Morháč opines.

Meanwhile, some companies have developed their own solutions to help transition to the Industry 4.0 concept.

“What is new about this solution is that the collaborative robot doesn’t have to be placed in a cage due to safety reasons, but can work right next to a person,” Michaela Bereta, spokesperson for Matador Group, told The Slovak Spectator.

The robot is now being used for assembling the mechatronic for the automatic gearbox.