They closed the door and wrote the Constitution

How did the basic document of the Slovak Republic come to exist? 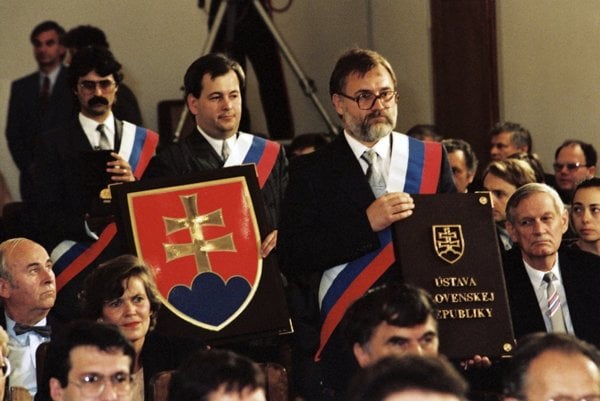 It was shortly after the Velvet Revolution when it was still not clear what would become of the Czechoslovak Federation, and whether and in what relationship both nations would remain. Amending the mistakes of the previous regime led, among other things, to both republics having their own constitutions. The law on the Czechoslovak Federation was long considered by them as an option, but due to the communist era of normalisation, had never been implemented.

In such circumstances, the Slovak Constitution began to be born. Recently, it has been 25 years since its adoption.

“Those were hours and hours spent in a very interesting way for me,” Anton Hrnko, current SNS MP and one member of the Committee comprised of the then Slovak National Council (SNR, i.e. parliament), recalls. “The Committee continueds meeting from February 1990 until May 1991 every week, sometimes every second week. The Committee came later to be called Plank’s Committee, as it was led by the then-head of the Supreme Court, Karol Plank.

It was a group of 42 people, including constitutional lawyers, historians, and also politicians and political nominees. Their task was to put together a text capturing the essence of the state – while they did not know exactly then what type of state. 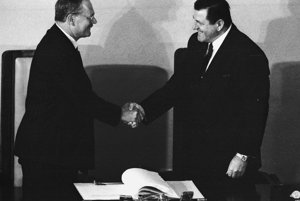 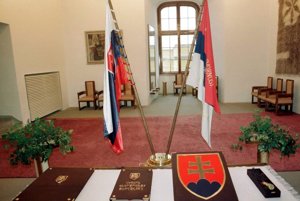 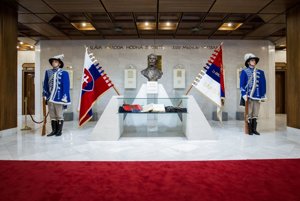 “In the Committee there were people like me – who more or less were resigned to the federation – and there were also clear supporters of the federation who were staunch nationalists,” Hrnko continues. “Another group were federalists who wanted to keep the federation even at the price of Slovakia losing the position it had had since 1968.”

Alongside the first Committee, a second committee initiated the same activities which came to exist after the 1990 election. The other Committee, comprising 22 people, was led by Plank. Political parties and their members were simultaneously working on their own versions of the constitution as well.

Ultimately, the first version of the constitution came into existence at the beginning of 1991, and its draft was handed over by SNR leadership.

“This document fully respected the federative organisation of Czechoslovakia. Out of this Committee, new teams were born later, which then elaborated individual constitutional texts,” then-SDĽ MP Ľubomír Fogaš, who worked in the Committee while also negotiating with the Czech side, recalls.

They worked in Trenčianske Teplice

The initiatives of individual sides finally led to seven different drafts of the constitution in the middle of 1991. At various times, even nine parallel texts existed; although ideologically close, some counted on, for example, a presidential, or even chancellor system of state.

The conclusion then was to put together a single draft that would constitute a combination of all the proposed versions. The difficult situation was ultimately influenced by the 1992 election, from which the HZDS party of Vladimír Mečiar emerged as the winner.

This again resulted in another committee including representatives of opposition parties or, again, experts participating in professional debates. By that time, it was very probable that Slovakia would become independent.

As an employee of the Government Office, constitutional lawyer Ivan Trimaj, who later became advisor to president Michal Kováč, was a member of the committee comprising more than 30 people.

“It was not possible to work on such a large team,” Trimaj remembered recently in an interview for Sme. “I said it to Vladimír Mečiar, who accepted it.” As prime minister Mečiar thus appointed a smaller team of people meant to be crucial in the debates: apart from Trimaj, there were the lawyers Ernest Valko, Pavel Holländer, Peter Kresák and the politician Jozef Moravčík.

“For two or three weeks, always with a one-week break, we sat down in Trenčianske Teplice and wrote what forms the basis of today’s Constitution,” Trimaj describes.

They did not leave the government facility in Trenčianske Teplice; neither did Fogaš, or MPs Milan Čič and Milan Sečanský (both HZDS). Čič is mentioned as “the main engine” behind the work by Fogaš, as well as by later president Ivan Gašparovič. The latter, as then-speaker of the Slovak National Council, attended the meetings, working mostly on parts of the wording concerning prosecution and judicial bodies, as well as the police. Before this, he was also a member of the first Plank Committee.

“The academician Čič requested the opinion of each and every member of the Committee,” Gašparovič recalls. “We created a structure of the constitution and drafts for individual chapters, and we handed them over to him in written form.” Even though some chapters of the future constitution were prepared by individual Committee members separately, the final form was always decided on by the entire Committee.

The final version of the Constitution eventually went through grammar proofreading and amendments at the Government Office. The final form as elaborated by the Committee was assessed by Mečiar as prime minister as well, Gašparovič admits.

Ultimately, it went to parliament on September 1, 1992. Even though it originally expected the draft to be discussed for several days, in the afternoon of that same day the news arrived that the communist-era politician, dissident and then-chair of the Czechoslovak Federal Assembly, Alexander Dubček, had a car crash near Prague. As his condition was critical and he could have died at any moment, this sped up the negotiations.

“The fear arose that this could threaten the passing of the Constitution, and slow down the entire process of gaining independence. So the adoption process was accelerated artificially, and the vote was taken on the very evening of that day,” Hrnko recalls.

In the end, 114 MPs voted for adopting the Constitution, while 16 were against and four abstained. The entire Christian-Democratic Movement, KDH, was against it, which tried pushing its own draft through.

“The protection of life was not sufficiently secured, not in the way KDH had it in its agenda,” argues then-KDH chairman, Ján Čarnogurský. “It was also part of Mečiar’s political offensive, which later resulted in the Czechoslovak Republic being split, and being installed in the Mečiar regime.”

In the 25 years since its adoption, the Constitution has gone through several amendments – from enabling Slovakia to join the European Union, through introducing the protection of water, marriage, to solving the fall of the government or the possibility of revoking amnesties. Even though the last two issues are often criticised by experts, the authors of the Constitution are convinced that it has passed the “test of time”.

“The essence of the Constitution is still valid and unchanged, which we did not expect,” said Trimaj, who received an order from President Andrej Kiska at the start of this year. “Nobody expected it. A Constitution is usually formed in the course of several years.”