A new multifunctional hall is meant to improve sporting opportunities in the capital and its surroundings. 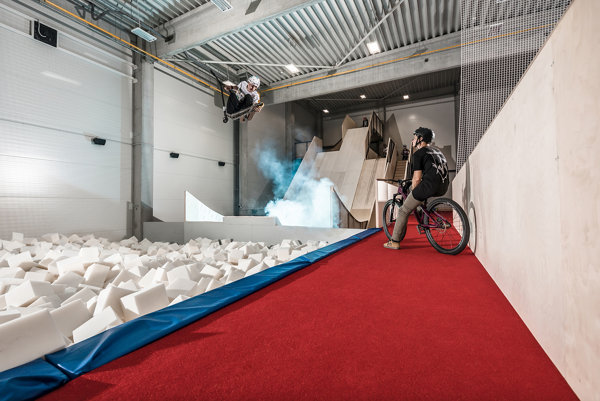 Lovers of extreme sports will have a new place to pump up their adrenalin. The new hall for extreme sports, Hangair, opens its gates in Bratislava’s city borough of Vajnory on September 5 for professionals and amateurs who like snowboarding, skateboarding, freestyle skiing and BMX riding.

The new multifunctional hall has the potential to improve sporting opportunities in the capital and its surroundings. It is a unique concept that cannot be found anywhere in Europe, the Startitup.sk website reported.

The whole project was created by four Slovaks who like extreme sports. The main investor is Slovakia’s former ice hockey representative Dominik Graňák. His team also includes his brother Adam Graňák and Tomáš Leiblinger, who both used to work for Red Bull, focusing on extreme sports.

The project was also supported by wakeboarder, snowboarder and sport events organiser Milan Purdeš and the marketing agency Kretiv Gang.

The team was inspired by the best extreme sports athletes. They also gained inspiration from the hall in Laax, Switzerland and similar complexes in Finland, Andorra and Warsaw, Startitup.sk reported.

“We are often asked why we didn’t build in Jasná or Liptovský Mikuláš, which are closer to snowboarders and skiers,” Adam Graňák told Forbes.sk. “But we had to take economic factors into consideration, so Bratislava was our clear choice.”

The complex will offer jumps with three platforms. A six-metre platform made from birch plywood is designed mostly for BMX bike riders, rollerbladers and skateboarders. Another two platforms, seven- and nine-metre tall, are designed for skiers and snowboarders. People will jump into a foam pool measuring 12 x 9 metres, Startitip.sk informed.