Coalition could end on Richter

The parliament is debating the future of Ján Richter as labour minister. If he goes, coalition fails. 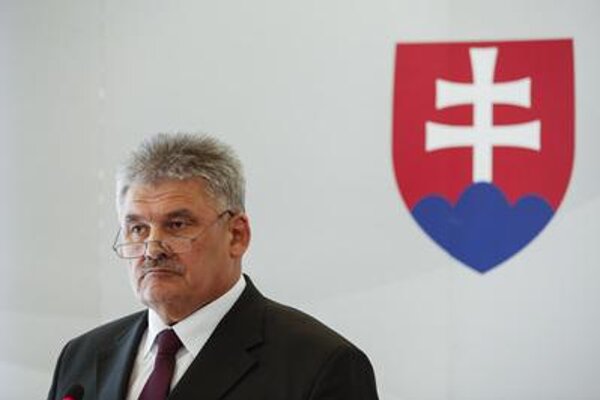 This school year started in Slovakia without a proper education minister, who resigned following the turmoil that the junior coalition Slovak National Party (SNS) provoked when they withdrew from a coalition agreement.

Unlike former education minister, Peter Plavčan, the ruling coalition has survived the crisis so far, and has put together a working group (composed of one person per each of the three coalition parties) tasked with writing the new coalition deal.

The hopes voiced by Smer leader, PM Robert Fico, and other coalition politicians that the new agreement could be signed on September 1, a national holiday marking the signing of the Constitution in 1992, never materialised. But the country’s top ruling politicians met on that day in the parliament to attend the pompous festivities of the Constitution’s 25th anniversary.

The coalition now allegedly expects to sign the new deal around mid-September.

“But I am not sure if this deadline is realistic either,” SNS MP Tibor Bernaťák said as quoted by the Sme daily.

SNS, reportedly experiencing problems finding a suitable expert to replace Plavčan, already announced they will most likely fill the ministerial post only after the new coalition agreement is signed. For now, Agriculture Minister Gabriela Matečná is leading the education department.

But the coalition struggle is not at an end yet. Plavčan had to leave the ministerial chair over allegations of murky practices linked with the distribution of hundreds of millions of euros from the EU funds for research and development.

In response to his departure, the SNS demands that also Smer’s Labour Minister Ján Richter resigns. The opposition is going to attempt to oust him in the parliament on September 7, citing the Čistý Deň resocialisation centre scandal as the reason.

At the September 6 session of the cabinet, the ministers unanimously dismissed the motion to recall Richter as a minister. Two SNS ministers abstained from the decision. Instead, the party issued a call on the prime minister to dismiss Richter.

“Due to the generally known and medialised facts that regard the functioning and the solving of problems at the labour ministry, the SNS is convinced that the ruling coalition cannot afford to gamble with the trust of voters anymore,” the call reads.

Danko and his party were expected to make a statement about their final decision on the vote, but that did not happen before the session started.

“It is all about how Slovakia should develop going forward, where the limits are that the SNS cannot cross in the coalition coexistence,” Danko told journalists prior to the session of his party’s parliamentary caucus, as quoted by Sme.

Some of the SNS MPs have suggested that about half of the caucus was inclined to vote against Richter.

The extraordinary session with the vote on Richter was scheduled to be held in the parliament on the same day. Fico labeled the whole session a “ridiculous performance of the opposition”.

The originally declared intention of the SNS behind their withdrawal from the coalition agreement was to get a new deal that would reflect the current situation in the country, particularly its favourable economic performance.

Since the start of the talks about the new deal, which the three coalition leaders (Danko, Fico, and Béla Bugár of Most-Híd) launched at their meeting on August 25, several demands emerged. The SNS is rumoured to demand the post of a deputy prime minister in the cabinet. It is now the only party that does not have such post – Smer has Deputy PM for Investments Peter Pellegrini and Interior Minister Robert Kaliňák who is also a deputy prime minister. So is Justice Minister Lucia Žitňanská of Most-Híd.