“A hundred is a nice number but it may be better to live as long as 100,” cyclist Peter Sagan said after winning his 100th race. “It’s really nice to have 100 victories, but there will never be enough of them.” 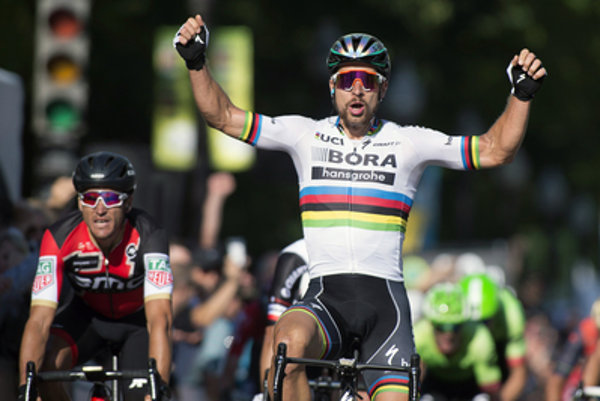 The Slovak cycling star was in a peloton of sprinters at the one-day race in Quebec where the finish seemed unpredictable and non-transparent. Suddenly, less than 200 metres before the finishing line, Sagan raised himself from the saddle of his bicycle and beat them all, the Sme daily wrote on September 11.

Only two of the still active cyclists have more victories than Peter Sagan: the Briton Mark Cavendish (145) and the German Andre Greipel (140).

Apart from being so spectacular and seemingly easy (he crossed the line with a smile and his arms up), this victory was special as it was his 100th.

However, Sagan seemed not to take his special victory as that important: “A hundred is a nice number but it may be better to live as long as 100,” he stated. “It’s really nice to have 100 victories, but there will never be enough of them.” Sagan added that “once you start being satisfied with something, you will stop growing. And that’s what we all want: to become better and better. I hope this number will grow”, he summed up on September 8 in Québec City. However, in the Sunday, September 10 race in Montreal, he did not repeat his previous feat. In two weeks, Sagan will also compete at the World Championship, Sme wrote.