In the face of tightening the debt brake, diminishing EU funds and lacking the millions of euros for completing the highway network in Slovakia, Prime Minister Robert Fico and his coalition partners want to soften this fiscal policy’s instrument so the state can take new loans to finance highway and railway infrastructure projects.

The ruling coalition has taken the first step in pushing through parliament a resolution on easing the state’s debt brake. It pertains to the construction of about 70 road stretches for €17 billion. But as the coalition needs opposition support to change the respective constitutional law, it is questionable whether it will succeed. 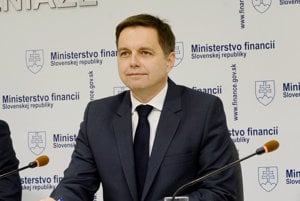 On September 11 the 150-member parliament adopted the resolution with the support of 76 coalition MPs except one independent deputy. Out of the 141 present deputies, 61 voted against and three, including the government’s proxy for dual carriageways Igor Janckulík, abstained from voting.

The resolution obliges the parliamentary committee of finances to prepare a revision to the constitutional law on budgetary responsibility and submit it to parliament for adoption.

Now the ministries of transport and finance are supposed to prepare the necessary documents and submit them to the committee by October 15. The deadline for the committee to submit the draft revision to the parliament is not known. It is expected for this to possibly last months.

The resolution also stipulates the creation of a special committee that would approve projects being financed from the eased debt brake. It should consist equally of opposition and ruling deputies.

Projects to be financed this way are also supposed to undergo evaluation within the Value for Money project.

None of the opposition deputies voted for the resolution. This lessens the chance of the debt brake being eased.

The support the resolution won in parliament is not sufficient for its final adoption. This is because at least 90 votes will be needed to change the existing constitutional law. So the ruling coalition with 80 deputies in parliament will need some votes from the opposition to push the change through. However, the opposition disagrees with easing the debt brake for now.

Back in 2011, the former Iveta Radičová government agreed with the then opposition of Robert Fico’s Smer on adopting a law on fiscal responsibility that set the limit on the general government debt, the so-called debt brake. The aim is, through sanctions and a correction mechanism, to prevent an increase in Slovakia’s debt to critical levels, i.e. spending heedlessly and excessively indebting the country.

The law stipulates five sanction bands, according to the debt level (ranging from 50 to 60 percent of GDP), with individual sanctions. If the debt reaches the highest sanction band of 60 percent of GDP, the government is supposed to ask the parliament for a vote of confidence. If it rises to between 50 and 53 percent, the Finance Ministry should submit to parliament a written justification for the debt amount, including measures proposed for debt reduction.

Sanctions related to a debt of between 50 percent and 60 percent remain in force until fiscal year 2017. From 2018 to 2027 the limits decrease by 1 percentage point yearly, until they reach 40 percent of GDP, the website of the Council for Budgetary Responsibility (RZZ), states.

Several foreign and research studies have shown that when risks stemming from a negative macroeconomic and demographic development are taken into consideration, the safe net government debt in the case of Slovakia is up to 40 percent, RZZ writes on its website.

In July, Finance Minister Peter Kažimír delineated three alternatives for the current scheme: a transition to a net debt instead of the current gross debt (which would enable the more flexible financing of Slovakia’s state debt), preserving the gross debt while scrapping the progressive character of the sanctions, and the introduction of investment exemptions. The last alternative has already been discussed for some time and this alternative is also proposed in the resolution.

Slovakia is making heavy use of EU funds to complete its cross-country D1 highway from Bratislava to Košice. The funds allocated for Slovakia until 2020 are already distributed among individual projects and there are some stretches for whose construction the government lacks money. It wants to utilise the current favourable conditions on the financial market and take new loans for financing. It wants to finance railway projects from loans as well.

There are estimates that the easing of the debt brake may bring in as much as €5-€7 billion.

Transport Minister Árpád Érsek has already indicated that if the debt brake is not eased, he would opt for PPP projects.

The opposition deputies do not agree with the argument about Slovakia lacking funds for highway construction after the EU funds finish. Deputy Eduard Heger of the opposition OľaNO points out that Fico’s government is planning a surplus budget for 2020.

Miroslav Ivan of SaS added that easing the brake is not necessary since the highway projects are not prepared and so there is nothing to construct. Moreover, the Transport Ministry has not set any priorities for highway construction.

The government’s proxy for dual carriageways Igor Janckulík, who abstained from voting about the resolution, agrees that there is only little stretches prepared for construction; that there will be enough funds in the state coffers; and that EU funds from other programmes can be moved to finance highway construction.

Economists are against easing the debt brake

Radovan Ďurana, analyst with the economic think tank INESS, is one of those opposing the easing of the debt brake. Neither does he see the current debt brake as too tight.

“So far I haven’t heard an argument I would consider adequate and sufficient for changing the debt brake,” said Ďurana, as cited by the Hospodárske Noviny daily.

The lack of money for highway construction as mystifies him.

“It’s not true there is lack of money for these projects in Slovak public finances,” said Ďurana. “We don’t know how to build highways. Their construction is often overpriced, almost every time slowly, without maintaining deadlines.”

Ďurana also believes that financing of the state debt is in a huge scope conditioned by trust of investors in responsibility of representatives of the state.

“The debt brake is a signal for investors that the financing of this debt would be stable,” said Ďurana. “The second reason is that this is the only instrument citizens have in the Constitution that guarantees that their representatives will not initiate any irresponsible indebting.”

On the other hand, economist Anton Marcinčin, the government’s proxy for support to the least developed districts, supports the easing of the brake.

“All transition economies need really huge investments,” said Marcinčin as cited by Hospodárske Noviny. “There is a need [for investments] in education, infrastructure, quality of public administration.”

He does not agree with the argument that there is an indebting risk that may cause Slovakia, as an ageing country, problems in the future. Contrary to this he believes that Slovakia should prepare for ageing.

“If we didn’t secure whole-life education, basic infrastructure and didn’t restructure the public sector, the reduction of the debt would bring us nothing,” said Marcinčin. “It would actually mean sitting around twiddling our thumbs and waiting to see what Germany or somebody else would think up instead of us.”

The Council for Budgetary Responsibility (RZZ) is also against easing the debt brake in the proposed manner. It sees this as neither suitable nor needed.

“It may improve the effectiveness of managing public finances,” Šramko said during a TV discussion.

Another alternative he can imagine is slowing down the declining dynamic of the debt, meaning it would last longer until Slovakia achieves the debt target of 40 percent of GDP.

But he is against the investment exception.

“There is neither reason for its adoption nor will it be suitable,” said Šramko.

Šramko added that thanks to the existing debt brake, it makes the re-financing of the state debt cheaper. He estimates that savings in Slovakia can achieve this at almost €1 billion within 10 years.

Several opposition deputies see the easing of the debt brake as a political gesture prior to the regional election scheduled for November 4, pointing out that some MPs who prepared the resolution are running for the posts of regional governors.

The opposition of Boris Kollár’s We Are Family party is against easing the debt brake.

The Freedom and Solidarity (SaS) party said after the September 11 parliament vote that it would not support easing the debt brake.

“After long years of economic growth and increasing public finance revenues we have reached a point where we aren’t speaking about reducing the debt, but about ruling deputies needing to increase it,” said Eugen Juryzca from SaS.