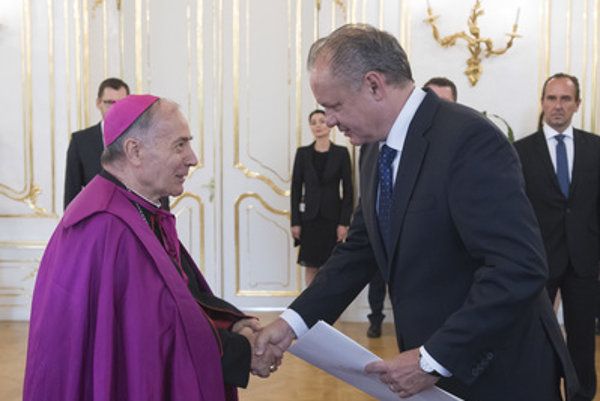 On April 1, Pope Francis appointed the new apostolic nuncio for Slovakia, Monsignor Giacomo Guido Ottonelo. The new nuncio handed over his credentials to President Andrej Kiska on September 12, at the Presidential Palace.

From this time on, he has launched his diplomatic mission in Slovakia, the Conference of Bishops of Slovakia (KBS) informed the SITA newswire.

Ottonello took over the office from Mario Giordana who reached the canonical age of 75 and so retired.

Giacomo Guido Ottonello was born on August 29, 1946 in Mason, Italy. He was ordained on June 29, 1971 and appointed to the diocese in Acqua. He received a PhD in theology, and started his mission as a diplomat in the Holy See on March 25, 1980. Later, he worked with Papal representations in Pakistan, El Salvador, Lebanon, France, Spain and Poland. As apostolic nuncio, he worked in Panama and Ecuador.

Ottonello arrived in Slovakia at the end of June. Apart from his mother tongue, Italian, Archbishop Ottonello speaks French, Spanish and English, according to SITA.