But observers consider the property disclosures rather vague. 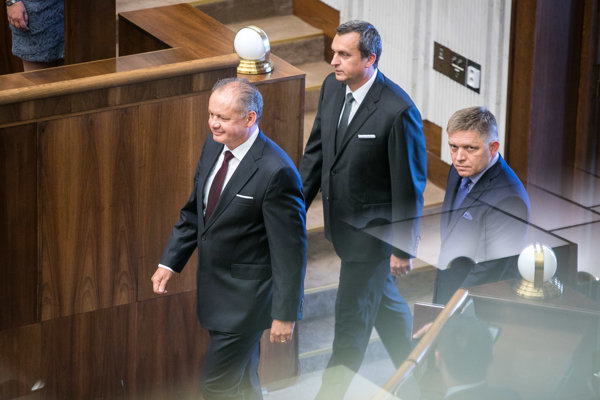 From the top three constitutional representatives, President Andrej Kiska earned the most in 2016: more than €370,000. This stems from the property disclosures published by the parliamentary committee for conflict of interests.

“All pages have been scanned, processed and saved in the database,” Poliačik said, as quoted by the SITA newswire, adding that the information is archived in the parliament and the basic data is published on its website.

The committee also initiated a proceeding against State Secretary of the Education Ministry Peter Krajňák, as he received a salary when appointed to a public post. He was member of the Prešov-based company responsible for the administration and winter maintenance of local roads. He may lose up to six monthly salaries, Poliačik told SITA.

How much did the politicians earn?

Kiska stated in his property disclosure that his income from his public office amounted to €97,151 last year, while the lump-sum allowances amounted to €15,933. His other income amounted to €257,048.

He also disclosed his properties in Poprad and Veľký Slavkov, money in bank accounts and shares in companies and in an investment fund, and providing loans to third parties, the TASR newswire reported.

Speaker of Parliament Andrej Danko of the Slovak National Party (SNS) earned more than €270,000 last year. From this sum, he received €22,897 from his public office and €12,059 as lump-sum allowances. The remaining €236,077 is income from his halted advocacy.

As for intangible property, Danko stated his own grasslands, built-in areas and courtyards, vineyards, gardens, house, non-residential spaces and a flat. While in 2015 he claimed owning nine cars, this year he had only one, the Hospodárske Noviny daily wrote.

Danko also has shares in a company, various debt claims, loans and a mortgage, money deposited in bank accounts, and artworks, TASR reported.

Fico also claimed to own a cabin in Malé Leváre, a vineyard in Bratislava, the furniture in the cabin, some shares, savings, a car and construction savings, TASR wrote.

As for the ministers, the highest incomes were reported by Environment Minister László Sólymos (Most-Híd), who earned €434,951 in 2016. Second is Health Minister Tomáš Drucker (Smer nominee) with income amounting to nearly €356,000, followed by Interior Minister Robert Kaliňák (Smer) with more than €321,000, TASR reported.

Observers, however, warn that the property disclosures published by the parliament do not sufficiently map the real property of public officials. One of the biggest problems is the vagueness of the stated property, from which it is only very hard to say how much it actually costs.

“Slovakia has been offering the possibility of submitting reasonable and transparent property disclosures on the Politikaopen.sk website for years,” Michal Piško of the ethics watchdog Transparency International Slovensko told Hospodárske Noviny. “Unfortunately, only a few politicians and public officials use it.”

Justice Minister Lucia Žitňanská (Most-Híd) is critical of the current system. In her opinion, it is time to review it, Hospodárske Noviny wrote.