This time round, the Slovak, European and US ensembles at the theatre festival focus on #fundamentals, i.e. basic values and the essence of all things. 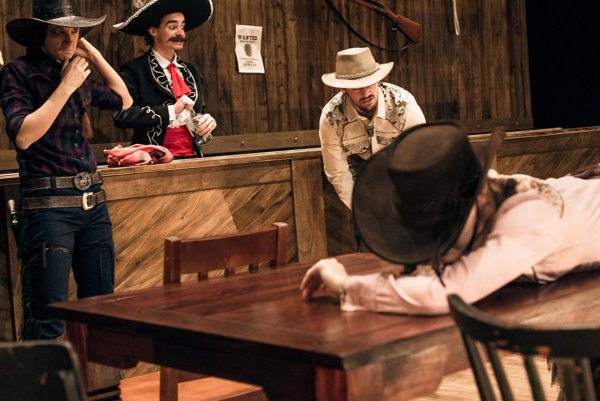 The main programme of the Divadelná Nitra event, taking place between September 22 and 26, offers 14 performances of 10 pieces by ensembles from the Czech Republic (and partially Greece), Poland, Belgium, Slovenia, the USA – and, of course, Slovakia.

One of the blockbusters is the off-Broadway play of Slovak Pavol Liška who has been living and working in America for many years, organisers said. His famous Nature Theatre of Oklahoma – though it is in fact New-York based – will perform Pursuit of Happiness, in collaboration with the Slovenian dance troupe EnKnapp Group (of director Iztok Kovač, a previous guest of past Divadelná Nira). This opening piece of the festival is a unique drama that explores not just the fundamental right found in the American Declaration of Independence but also the notion of democracy and happiness in human life – in an innovative, western-like, humorous play, though at the same time provoking. According to festival dramaturgy advisor Dáša Čiripová, it is reminiscent of Quentin Tarantino. Liška, already a popular and respected theatre-maker in the USA, is coming for the first time to his homeland to present his American work.

Family, sympathy, and understanding are the keywords of the Czech-Greek piece Black Black Woods of the La Putyka ensemble from Prague and Greek-Slovak dance troupe RootlessRoot (of Jozef Fruček and Linda Kapetanea) from Athens. The idea comes from actor Rostislav Novák of La Puyka but the piece exceeds common perceptions of dance theatre. In Black Black Woods, Rostislav Novák Junior taps into the father-son relationship, struggle of generations, relatives and different concepts with his real father, Rostislav Novák Senior, in a performance based on movement. It tries to reflect life from birth on, through childhood, adulthood, to senior age - in four hours.

Another Czech play at Divadelná Nitra is Actor and Carpenter Majer Talks about the State of his Homeland, a one-man show of Stanislav Majer, that touches on the terms of homeland, identity (in terms of civic society and patriotism) and authorities, another dramatic advisor Ján Balaj said. The award-winning play, written by David Zábranský, directed by Kamila Polívková and performed by the legendary Prague theatre Studio Hrdinů, uses a captivating monologue of the actor Majer to unveil the self-mocking artist, café intellectual and carpenter in one.

“It is one of the few Czech plays that boldly confronts and taps the issue of social atmosphere in the country, and the feelings of people – both those who leave for abroad and those who stay,” head of the festival Darina Kárová noted.

Another theatrical work focusing on homeland is the Belgian piece Zvizdal [Chernobyl so Far so Close] which includes a documentary movie shot over a period of five years. Zvizdal tells the true story of elderly Ukrainian couple who refuse to leave their home village, now deserted after the Chernobyl nuclear disaster. Rather than leaving their life-long home and adapting in a new environment, they prefer to risk radiation impacts and loneliness. The Company Berlin from Antwerp have been regularly visiting them and recording their experience, feelings and their resolve to stay. 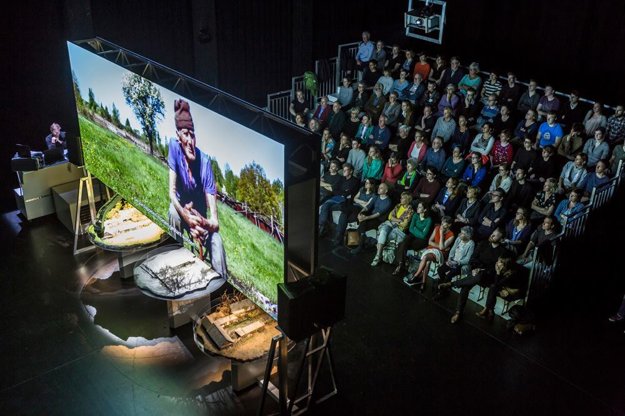 The last foreign work is One Gesture by director Wojtek Ziemilski and the Nowy Teatr from Warsaw. Four actors affected by different levels of hearing loss draw the audience into a world devoid of words and languages, but full of non-verbal communication.

Slovak plays are varied, too

Slovak productions at Divadelná Nitra include a “different” perception of the myth surrounding national hero, Jánošík, of the local Andrej Bagar Theatre – directed by Rastislav Ballek – and the Dostoevsky-inspired play Possessed (i.e. Demons) of the Alexander Dukhnovich Theatre from Prešov, in the Ruthenian language. Modern day demons are obsessed beings who lack love and refuse to mature and grow up, as opposed to the soldiers of wrath and death of old.

Miracles is a project by Iveta Ditte Jurčová and Michal Ditte of the Pôtoň Theatre but it also comprises three other independent theatres, ensembles andpersonalities: the Debris Company, Honey and Dust, and Sláva Daubnerová. The unique piece takes audiences on a voyage of three kilometres, three hours and four settings in the former royal town of Bátovce (where Pôtoň Theatre resides) with the world of miracles, dreams and fantasy as the ultimate goal.

War’s Unwomanly Face of the Slovak Chamber Theatre Martin and director Marián Pecko has already been performed at the New Drama festival. However, its message – going back to the role of women in World War II as well as in the post-war reality – seems to be so pressing that it is also part of Divadelná Nitra.

The last, but not least, Slovak participant is the Elites stageing of the Slovak National Theatre from Bratislava of Czech author/director Jiří Havelka, a musing on power elites past and current, in the form of unpleasant anecdotes, with bitter humour, on the difficulty of telling truth from lies, compromises in mortality, and survival due to collaboration.

Divadelná Nitra is more than a display of theatre pieces or a festival, it is a platform and basic tool and condition for networking and international cooperation: it is part of a project of young theatre reviewers, and a study residence of Czech and Slovak students of performing arts, Kárová said.

... and the accompanying programme

The five days at the end of September also offer a rich accompanying programme: discussions with theatre-makers, outputs of the reviewers' project, an insight into the life of the hearing impaired, and a host of events in local venues (e.g. White Night in the gallery, museum and synagogue) and in the streets.

“Fundamentals are perceived as something self-evident, everyday and common – and uninteresting in a way; until we start losing them,” dramatic advisor of the Slovak part, Miklós Forgács of the Košice-based Thália Theatre (playing in Hungarian) explained. He added that the social and ideological urgency of Slovak plays selected by him and József Czajlik sometimes prevailed over the artistic form.

However, a look at the dramas offered at the festival suggests that various forms, including the most innovative and up-to-date ones, are represented on the programme, and everyone can choose according to their taste and preference.