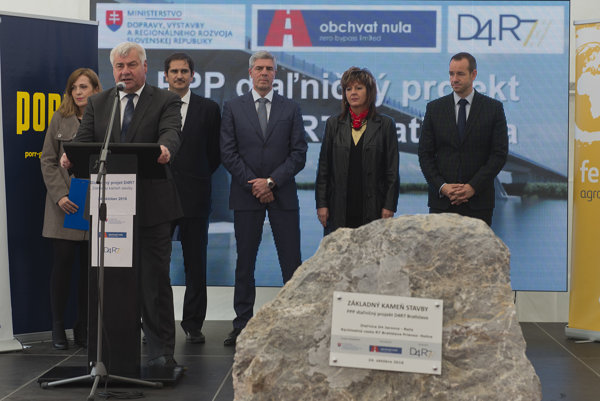 The construction of the Bratislava ring road was symbolically launched in October 2016. (Source: TASR)
Font size:A-|A+

The construction of 60 kilometres of roads around Bratislava carried out via a public-private partnership (PPP) project is late, Transport Minister Árpád Érsek admitted.

Unofficially, the delay of the Bratislava ring road that includes the D4 highway and R7 express dual-carriageway may be as high as eight months, the Sme daily reported.

The lastest construction permit became valid only on September 15. Moreover, the construction work on sections that had the permit began in August, though originally they were to begin in spring. Érsek now plans meeting with the representatives of the concessionaire company Cintra to discuss the delay. 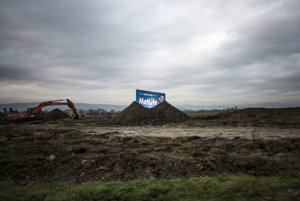 The whole construction was obstructed by problems involving the purchase of the plots under the future roads to be part of the project. To speed up the process, parliament adopted changes to land expropriation in a fast-track proceeding in May, enabling the state to start construction work on the plots under the highways and express double-carriageways even before the expropriation proceeding was completed.

The change was slammed by the opposition, which turned to the Constitutional Court, questioning its constitutionality, Sme reported.

The state is building the ring road via a PPP project, meaning that the constructor will build the roads from its own money and the state will then pay for its construction and operation in the next 30 years.

The project will cost altogether €1.8 billion, with an annual instalment amounting to €56 million, Sme reported.

The agreement with the consortium of constructors led by Spanish company Cintra was signed by previous transport minister Roman Brecely of Sieť. Brecely continued in the project started by his predecessor Ján Počiatek of Smer, who launched the competition.

The D4 and R7 roads were expected to be completed in 2020. This deadline is in question now, as the construction work may last more than four years. This means that when they begun in August, the roads would be completed only in 2021, according to Sme.