Unemployment rate continues to decline, could be distorted by fake job-seekers

The still steeper fall in unemployment could be curbed by the type of jobseekers, analysts opine. 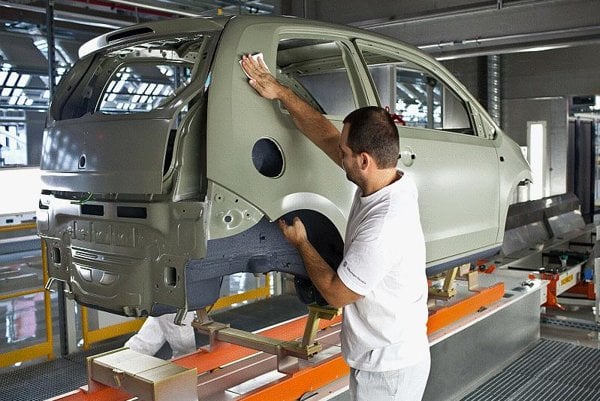 The unemployment rate in Slovakia stood at 6.54 percent in August, which is a decline of 0.16 percentage points (p.p.) month-on-month and of 2.89 p.p. year-on-year.

The number of jobseekers immediately able to take up a job was 178,253 in August, a decrease of 4,501 individuals m-o-m and of 78,018 y-o-y, the Labour, Social Affairs and Family Centre (ÚPSVaR) general director Marián Valentovič and Labour Minister Ján Richter said on September 20.

All eight regions in Slovakia recorded cuts in the unemployment rate in August, with the Prešov Region seeing the most significant drop. As for districts, the unemployment rate was down in 72 districts in Slovakia in August, while increases were recorded in six districts. Labour offices reported 69,104 job vacancies in late August, down by 8,045 vacancies m-o-m. The highest number of jobs were available in the Bratislava Region, while the lowest were in the Košice Region.

Slovakia continues to enjoy a positive trend with falling unemployment. “In terms of y-o-y decreases, Eurostat has assessed Slovakia as one of the most successful countries in the eurozone,” Richter noted. “We also managed to reduce the unemployment rate among young people aged under 25 in August, as we recorded a y-o-y drop of 5.5 percent in this group.” The labour minister added that the number of employed people has also increased, to a record number since the country became independent in the 1990s. “Never in the history of Slovakia have so many people been employed in the country. As many as 1.92 million people were employed in August – almost 80,000 more than in 2008,” the minister stressed, adding that this positive figure is not only the result of good developments in the economy but is also thanks to the results of policies and projects introduced by individual labour offices.

Analysts are more critical and realistic

However, analysts, as cited by TASR, are of the opinion that a more pronounced drop in the unemployment rate is being counteracted by an unsuitable composition of the unemployed population, as businesses struggle to find suitable candidates to fill vacancies. The unemployed often lack the qualifications, working habits or, most critically, even the desire to get a job.

“While economic axioms tend to state that the natural unemployment rate is around 4 percent, things are different in Slovakia,” McRoy Group management board chairman Ľuboš Sirota told TASR. “The labour market stops functioning well when the unemployment rate is just above the 6-percent mark. This is because of the poor structure of the unemployed population, most of which are difficult to employ.”

There is little in the way of potential for further falls, however, he noted. Given the difficulties that firms have in filling vacancies, the number of job openings has been rising considerably. Their official tally is over 69,000, but Sirota pointed out that the actual number topped the 100,000 mark a long time ago. “Not all companies – by far – report vacancies to job centres,” he said.

UniCredit Bank Czech Republic and Slovakia analyst Ľubomír Koršňák echoed Sirota’s view on the unfavourable structure of the unemployed population and stated that this is what counteracts a higher outflow of jobless people from job centres.

“Recently, it appears that – more than in the poor qualifications of the jobless – the trouble may reside in the uneven distribution of unemployment across the regions coupled with rather low workforce mobility,” he said, as quoted by TASR. The UniCredit analyst added that the available vacancies do not match the labour force registered with job centres. “The openings are concentrated primarily in the western part of the country, where there’s already a shortage of people to fill them,” said Koršňák. He also added, though, that seasonal lapses caused by the holiday period have had an impact this year, too.

Having said that, the growing economy should retain its ability to create jobs in the months ahead, and thereby push the unemployment rate downwards to new historical lows. The current economic growth is relatively demanding for labour, when unlike in the past, it is not driven by massive investments into economic modernisation which increased labour productivity, and thus lessened the demands for new labour.