Extremist party led by Marian Kotleba would have come third

Had a general election been held in mid-September, it would have been won by the governing Smer party with 26 percent of the votes, garnering 43 seats in parliament, according to a Focus agency survey.

However, the survey, conducted on a sample of 1,005 respondents between September 11-18, showed decreasing support for Smer by almost 2 percentage points, as well as decreases for other coalition parties. Coalition Slovak National Party (SNS) decreased from 9.1 percent to 8.7 percent (15 seats) and Most-Hid from 6.8 percent to 6 percent (10 seats).

Parties recently faced a coalition crisis related to a eurofund distribution scandal in the Education Ministry led by SNS. 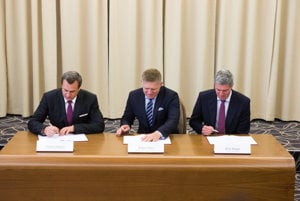 Read also: Coalition only agrees on how to talk. But what will they talk about? Read more

The Freedom and Solidarity (SaS) party would have come second, as the preferred choice of 14 percent of respondents (23 seats), while the far-right People's Party Our Slovakia (ĽSNS) would have come third on 10.4 percent (17 seats).

Other parties that would reach the 5-percent threshold and make it to parliament are OĽaNO with 9.6 percent (16 seats), We Are Family with 9.1 percent (15 seats) and Christian Democratic Movement (KDH) with 6.4 percent (11 seats) and Most-Hid (6 percent/10 seats).