Blog: In Slovakia, tradition is key

The year round, the calendar is filled to the brim with traditional habits, happenings that seem to go back centuries. 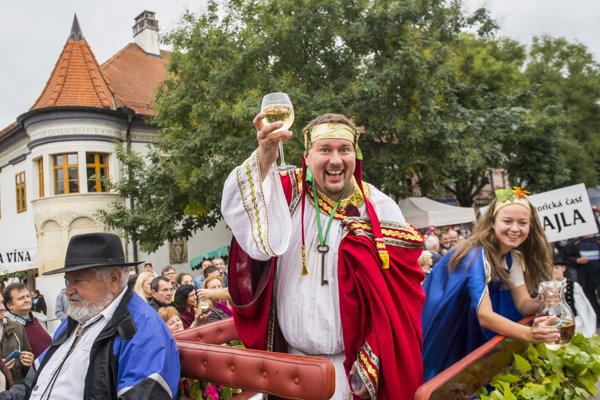 Traditions, in any sense of the word, defines for a large part a country’s heart and soul. It provides some of the most important elements any society needs and no politics or economics can give - solidarity, identity and the feeling to belong. Unfortunately, many countries nowadays seem to have forgotten that it were the things from the past, the habits from one’s ancestors, the gatherings of people during harvest feasts, or the specific language they spoke that gave the people a sense of togetherness; a sense that they belonged to a more or less defined group of people that share the same traditions.

Many countries nowadays ignore traditions altogether, seeing them as “a thing from the past” that does not fit in a world that should never look back but only look forward. Sometimes, traditions are even taken completely out of their original context to serve as a vehicle for political debates about racism and discrimination, ultimately destroying what used to be an innocent tradition. It should perhaps come as no surprise that these countries are nowadays known for their individualism, having hacked away the traditional foundations that bind people together, slowly loosing sense of where they came from, while only focusing on themselves and no other.

I am therefore so relieved to see that in Slovakia traditions still hold a very important place in people’s lives. In fact, the year round, the calendar is filled to the brim with traditional habits, happenings that seem to go back centuries, folk festivals, village feasts, Church feasts, very local celebrations and country-wide festivities. Right now, you can attend the “vinobranie”, celebrating the harvest of the grapes, in all wine-regions in the country. On November 1, the country goes all out in remembering and celebrating their dead on All Saints Day, transforming the graveyards into mesmerising landscapes of candle lights. During the entire winter season, many villages organise their local “zabíjačka” feast, an event where a pig is slaughtered and divided among the villagers, reliving a time when such event was an important moment in village society to bring the families together. At Easter, traditions are honoured involving water, perfume and a whip, signifying the importance of health, beauty and welfare.

The most important event of all, however, will always remain Christmas. Although there are many regional differences in how Christmas is celebrated in Slovakia (including the contents of the traditional sour cabbage soup, “kapustnica”), here is a feast that is bursting to the seams with traditions and where every element holds meaning. Whether it is the way the table is set (e.g. one extra plate for the unexpected, but always welcomed, guest), the happenings during dinner (e.g. starting of the dinner with a waver with honey and garlic, symbolising health and beauty in the upcoming year), or the time that follows (e.g. visiting as much family as you can cram in two days or keeping a scale from the carp fish you ate during the Christmas dinner for luck in the next year).

Moreover, Christmas in Slovakia is still a very Slovak Christmas, meaning that the Westernisation of many things have not had any influence on this feast with baby Jesus, not Santa Claus, bringing the gifts. The special place Christmas has in the hearts of most Slovak’s is further visible in the willingness of many people to travel literally hundreds of miles across the country to be together with their families.

Slovaks truly seem to understand the inherent characteristic of traditions to promote togetherness, intimacy and solidarity. It is this characteristic that provides the true backbone to a nation’s identity. It contributes significantly to the foundation upon which a country builds its future. In fact, you might even call it the glue that keeps a people together. In Slovakia, this has been fully integrated in daily life. In Slovakia, tradition truly is key.

Slovakia’s intimate relationship with its traditions has fascinated me ever since I celebrated my first Slovak Christmas, seven years ago. I try to participate in most of the happenings throughout the year, every year. I also gladly encourage every foreigner to do the same and to accept the invitation of friends to enjoy some “burčák” during the wine festival, to take an evening drive past the cemeteries during All Saints Day or to indulge themselves on a lavish Christmas dinner, Slovak style. Immerse yourself in all of this, for part of understanding a country is to understand its traditions.