The social package includes 13th and 14th salaries, a hike in the minimum wage as well as supplementary payment for night work 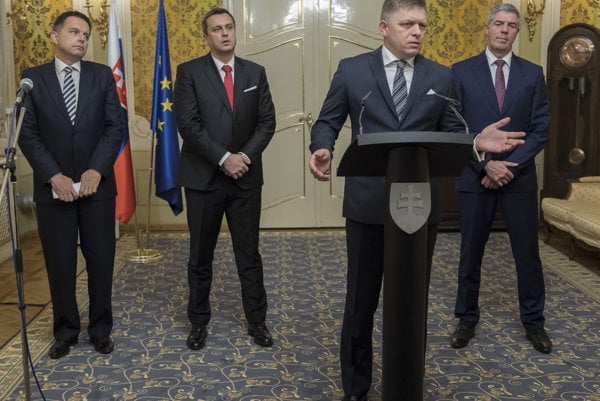 The three coalition parties Smer, the Slovak National Party (SNS) and Most-Híd have agreed upon the draft state budget for 2018 with a record low deficit of 0.83 percent. They also reached agreement on the so-called social package where each of them managed to squeeze in some of their own measures. Prime Minister Robert Fico stressed that all the proposed measures have already been regarded in the 2018 state budget.

“If we are talking about next year’s deficit, it already takes the social package into consideration,” said Prime Minister Robert Fico, informing about the results of Thursday’s meeting of the leaders of the ruling coalition as cited by the TASR newswire. “A certain financial volume is necessary for each measure. We have summed it up and we are still keeping within the planned deficit.”

The coalition parties have agreed upon keeping all commitments formulated in the government programme manifesto. The gross debt of the general government should reach 49.7 percent GDP in 2018, the lowest level since 2012.

Finance Minister Peter Kažimír added that next year, for the first time in history, the state budget gap should narrow to below 1 percent of GDP. Slovakia continues to reduce the general government deficit which should be around 0.1 percent in 2019.

The government seeks to achieve a balanced budget for the general government by 2020.

The social package includes an increase in the minimum wage, introduction of the 13th and 14th salaries and supplementary payments for night, weekend and holiday work and more. The government still needs to consult with its social partners however.

Fico reiterated that the minimum wage should grow to over €500 by 2020.

The parties have also found a consensus on the parameters for the 13th and 14th salaries, asserted by SNS. It will be a voluntary tool. SNS leader Andrej Danko praised the fact that the coalition parties have taken such a balanced attitude in the talks.

“The idea is that we should gradually reach a point where it is possible that employers would be exempt from levies while paying out the 13th and the 14th salaries,” said Danko as cited by TASR.

Most-Híd succeeded in including its proposal to exempt working pensioners from levies up to €200, similar to the arrangement for students.

They are also introducing more significant support for those commuting or moving to work somewhere else.

The finance minister announced that they would propose new tariff salaries in the public sector at the beginning of next year and these should become effective as of 2019.