Germans in Slovakia preserve their culture

The German minority is aging, and despite efforts, not many young descendants affiliate themselves with their origins. 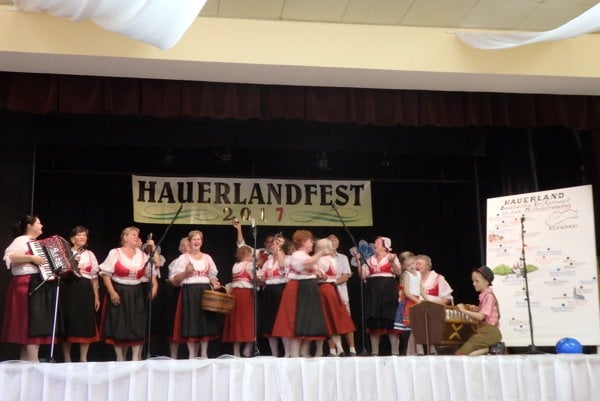 Hauerlandfest is one of the bigger regional events. (Source: Courtesy of the SNM – Museum of Carpathian German Culture)
Font size:A-|A+

“National costumes, typical for Kunešov, are too small to be worn by our women, and we don’t have money to alter them,” said Viliam Neuschl from Kunešov, an originally German village near Kremnica, central Slovakia. But who will wear them when young people are not interested?

That question of Neuschl’s sums up the concerns of those who care about the future of the German minority and its identity in Slovakia. Neuschl himself is an active pensioner involved in the local branch of the Carpathian Germans’ Club (KNS) in Kunešov. We should do our best to preserve our culture, he said, although he admits that the current situation “does not guarantee us the cultural development”.

A decreasing number of young people affiliated with the Germans as well as the ageing of the members remain the most serious problems identified by the minority itself in the recent reports prepared by the Office of the Government’s Proxy for National Minorities. Listed among other problems are the perception by the society and low interest of Germans to take a more responsible attitude towards their organisations.

The minority, which was still tens of thousands strong a century ago, currently counts only 4,690 people, based on the numbers from the 2011 census.

How the minority shrank

For centuries, the German community was strong in Bratislava, in the Lower and Upper Spiš regions (Gelnica, Levoča, Poprad, Stará Ľubovňa, Kežmarok), in the Bodva region (Košice, Medzev) as well as in the Hauerland region in central Slovakia (Nitrianske Pravno, Kremnica, Handlová). Given the 2011 census, the highest number of Carpathian Germans lives in Bratislava (963), and Hauerland – a group of 16 dispersed municipalities including Kunešov (730), Medzev (354), Chmeľnica (184), and Mníšek nad Hnilcom (97).

The lives of about 150,000 Germans after a thousand, more or less tranquil, years on the territory of Slovakia rapidly changed before the end of WWII, when the authorities of the Nazi Third Reich began evacuating Germans from Slovakia. After the war, those who stayed in the new state, Czechoslovakia, faced another hardship.