Head of White Night: We had to explain we are not racists

For the third time, there will be the annual festival of visual art in Bratislava 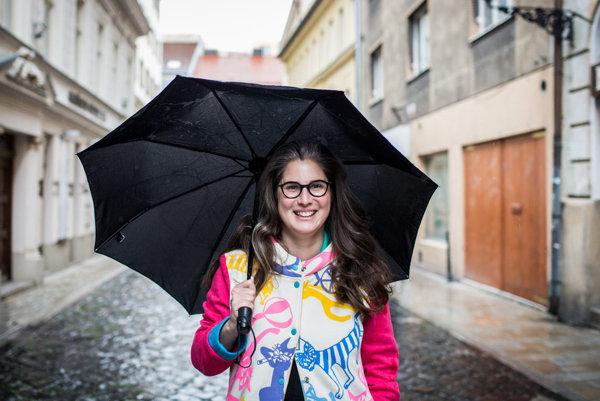 Zuzana Pacáková (31) studied at Sorbonne in Paris and interned at several French exhibition institutions. After she returned to Slovakia, she started organising the White Night art festival. Three years ago, she moved it from Košice to Bratislava.

She said she sometimes envies the ability of the Pohoda festival organisers that they can build their own town at the airport. She, on the other hand, has to bring her whole festival to existing structures, persuade officials and companies, and coordinate ships, airplanes, firemen and divers. This means working year round on the festival.

Sme: You were living in Paris for years – don’t you miss it?

Zuzana Pacáková (ZP): Of course I do. It is a city with an unbelievable atmosphere which cannot compare to Košice or Bratislava. I miss exhibitions and friends but, on the other hand, I don't miss everyday life spent in the subway and on crowded squares. I am satisfied in Slovakia.

Sme: You had a job offer for the Centre Georges Pompidou but instead you returned home. Do you regret your choice? It could have opened the door to another world.

ZP: Usually, I don't regret my choices. Everything has its ups and downs. In the seven years I lived in Paris, I worked in several institutions. I could see how professional issues are organised in Louvre, Musée d'Orsay, Palais de Tokyo and also in Centre Pompidou. They are all huge giants, machines that sometimes are like banks in their size. I had a splendid experience at these prestigious institutions but I was doing painstaking, small jobs there. The curators there were 50, 60 years old. If I stayed, I would have been just the assistant of an assistant for years, making too many compromises. I wanted to work on my own projects.

Sme: You organised the first year of the White Night in a distant form, from Paris – wasn't it complicated?

ZP: I made the festival in Košice, in the city where I was born, where I knew every corner and every single room. We organised the first year on a small scale, with local artists – the extent and difficulty of the festival can not be compared with today's festival. During summer vacations, I returned home and managed to finish the hardest part of the organisation.

Sme: In the first year, vandals destroyed most of the artworks within several hours. Were you discouraged?

ZP: We were very disappointed, that is true. We had been working on the artworks for one year, and within a moment they were destroyed. We organised the first year in a very punk and naive way. The works were not guarded, nor insured. After the festival, we tried to educate the public so that people would understand that art should not be stolen, torn from the ground, or kicked. Vandalism is not just a Slovak phenomenon, however – also in Paris, some statues were sprayed. We are in a public space, and this has its own specifics. Moreover, people in Slovakia didn't have any previous experience with a similar festival. So we can liken it to a situation in which you come to a gallery for the first time in your life, and you want to touch the artworks.

Sme: When you organised this new thing in Košice, how did the institutions and authorities that needed to approve it react? Did you have problems with them?

ZP: It was at a time when the project European Capital of Culture was prepared in Košice, and such projects were a priority for the city administration, so the approval procedures were simpler. It was worse, though, when we started to organise White Night in Bratislava three years ago. Again, we started from point zero and the rules were uncompromising.

Moving from Košice to Bratislava

Sme: Why did you feel the urge to move the festival also to Bratislava? Didn't you prefer to draw Bratislavans to Košice?

ZP: It is very hard to attract them from such a long distance. Moreover, it was advantageous for us from several points of view: we needed to grow, and this was not possible in Košice anymore – be it from the point of spaces or finances. Such a festival is very expensive, and after Košice ceased to be the European Capital of Culture, they stopped receiving many grants. We have to pay royalties, moving of the artworks, insurance policies, security services, materials, technical devices brought from various places, climbers, divers, scaffolding, a million things. When we wanted to keep pace with other cities which have a White Night abroad, we had to consider which strategy to opt for. In Bratislava, there are more sponsors, more options for financing, we can offer the most expensive artists/artworks in both bratislava and Košice, but only one third of all artworks are the same in both cities.

Sme: How long does it take to prepare the festival every year?

ZP: It is a year-long work. We constantly negotiate with artists – already now, we have booked some of them for next year's edition. The post-production phase lasts for at least two months after the festival, and then immediately we start to manage new grants, projects, prepare new dramaturgy, search for apt spaces. This lasts for quite a long time and it is a complex process.

ZP: Everyone requires various licenses, permits, and we also have to oblige specifics required by each artist. In Bratislava, we have to coordinate shipping transport, power distributors, structural experts, builders, climbers, scaffolders. In the last phase, these days, around 500 people work at the festival – and it is still not enough. Sometimes I envy the Pohoda festival in Trenčín that they can build a whole town at the single airport. We have to make the festival in already existing structures, and this is often much more difficult. We have to persuade many people that what we are doing is worth it. In one year, we go through hundreds of meetings with people who don't understand what we explain to them.

Sme: How do you remember the atmosphere of White Night in Paris? Do you think you have managed to bring it to Slovakia?

ZP: I remember that as a student, I arrived in Paris in September, and a few weeks later, White Night took place – it was one of the first events I experienced there. Many talked about it a month earlier, considering it the event of the year. I liked the idea that visual art, which is not as popular as film or music, can bring the whole city outdoors, all generations. I think we managed this also in Slovakia.“

Sme: In Paris, various galleries are open on White Night. Did you manage in Slovakia to agree with them on this?

ZP: Many of them already participate in the programme of this year but it is complicated, that's true. They have to be open all night, and every extra hour is a burden for their budget which is not very big. I think this is largely a financial problem, even though they realise that during White Night they can address a different type of audience than during ordinary opening hours.

Sme: Last year, visitors complained about the enclosed spaces; too many people got packed in some of them.

ZP: This is difficult. We charged money for some exhibitions exactly because of this – and expected fewer people would come if they had to pay. But the capacities are too small, still, and we cannot blow up the houses to be bigger, and many works have precisely stipulated conditions, that they can be exhibited only in enclosed spaces. They even have the dimensions and type of the room set – the width, the height, the depth, often also requiring a room without windows, as the darkness is crucial for them. We had to refuse some artworks, as we were not able to find an ideally apt space for them. For example, we have a great problem with large halls in the centre of Bratislava; there is just the one, the Old Market-hall, and the demand is huge.“

Sme: You also had to face imitators.

ZP: First, I was upset. In Košice, a White Night was organised in hotels, then on a small train, at a disco. We had the name later patented, as we had to explain to visitors that these are different events that are not part of our dramaturgy. A year ago in Bratislava, the Festival of Light was founded, which took place at a date close to our festival – and this is not a fortunate solution. On the other hand, I am happy that various similar events have come to exist, it is just that certain rules should be observed.

Sme: I suppose that the name White Night points to the whole city being lit up.

ZP: Yes, it is part of the meaning. The event was born at Paris city hall and they did not plan for it to spread across the whole world. In French, “nuit blanche” also means a night when all the people are in the streets and don't sleep. It is impossible to translate both meanings into other languages. Thus, for some time we had to explain in our context that we are by no means racists.