Author of several physical course books and co-founder of the Centre for the Popularisation of Physics says nature sciences open many doors for those who study them. 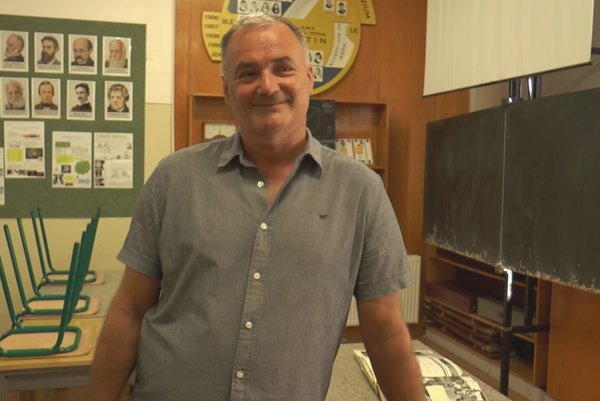 Physics tends to be one of the less popular subjects among high school students. It takes an insightful and innovative teacher to spark their interest in science, says Jozef Beňuška, who was awarded by the European Physical Society earlier this year.

The Award for Secondary School Teaching is granted every two years to a high school teacher for a specific contribution to teaching, in particular one that might be applicable in a variety of countries. Beňuška, who teaches at the Secondary Grammar School of Viliam Pauliny-Tóth in Martin, does not consider himself an outstanding teacher though.

“I think that there are thousands of teachers like me in Europe,” he told The Slovak Spectator.

While working as a teacher, he completed a third degree (PhD) programme in Nitra with a thesis called “The Activation of the Learning Process of Students and the Development of Physics Thinking with the Support of Graphical Animated Models Designed by a Computer Presentation Programme”. The PhD project resulted in the “Digital Handbook of Physics for Primary and Secondary Schools” course book.

Unlike thousands of other teachers, however, Beňuška has authored several physics textbooks for primary and secondary education. Before the books were published, he designed digital materials for teachers to use.

“I dare say that those books and materials are now being used by teachers in every other school in Slovakia and in the Czech Republic as well,” Beňuška said, adding that the idea came to him when digitalisation began.

“I felt the need to make something I didn’t see around me and which would enrich the lessons,” he stated.

Beňuška admits that it is not easy to draw students’ attention these days, but experiments always succeed in doing that. Those are definitely the most interesting parts of lessons for students, Beňuška opined. However, there are poor conditions at schools for students to carry out experiments.

“It is impossible when I have 30 of them in class,” Beňuška explained. “It would be necessary to divide the group and have enough teaching aids for every student, which is not the case now.”

He also stresses that students should perform the experiments themselves, not just observe the teacher.

Jozef Beňuška is not only the author of many physics textbooks, he co-founded and operates the Centre for the Popularisation of Physics at the school where he teaches to create space for students to experiment.

The centre has been functioning for 11 years now and students from Slovakia and even the Czech Republic come to visit and make use of it.

The aim of the centre is to spread the students’ knowledge of science through interactive experiments. The centre is designed for pre-school, primary and secondary school students, as well as for the general public. It attracts approximately 3,000 visitors per year.

It’s not a problem to come up with an activity when students are having fun, explain the basics of physics and then students have the space to try experiments on their own and compete with each other. They leave satisfied after two hours and spend time doing something they really enjoy, Beňuška explained.

Every year Slovak teachers have the possibility of meeting their colleagues at one of the schools to exchange knowledge and share experiences. The Vanovičove Dni (Vanovič’s Days) seminar consists of lectures focused on applying physics in practice.

The meeting has a long tradition, taking place every year for the last 50 years.

“We as teachers sit together and share tips and tricks on how to stimulate students’ interest in physics,” explained Beňuška.

The seminar, named after its founder and Slovak physics professor Ján Vanovič, who also originated from Martin, usually lasts three days and teaches teachers how to better explain the lecture to their students in a practical way.

Regarding the question of whether he does not regret his choice of career, Beňuška does not hesitate for a second:

“I enjoy time in school, the time I spend with my students, my work enriches me,” he said. He added advice for every student making the decision on whether to study natural sciences or not.