Lajčák: Germany is crucial for the UN

Slovakia and Germany signed a memorandum intended to deepen the cooperation between the two countries. 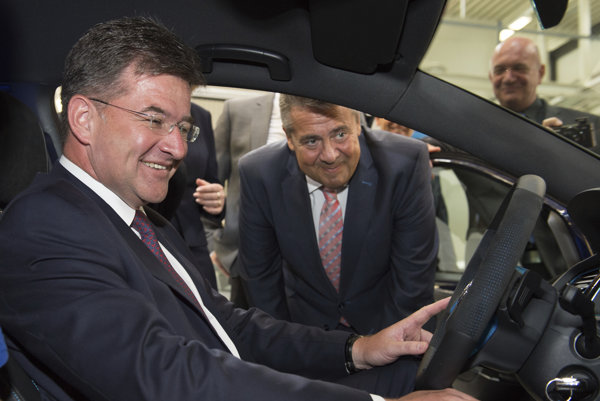 Germany has an important status not only in global relations, but also in the United Nations Organisations, said Slovak Foreign Affairs Minister Miroslav Lajčák after meeting his German counterpart Sigmar Gabriel in early August.

“Germany contributes to global stability, is a massive provider of development aid, supports sustainable development and defends human rights policy,” said Lajčák, who was elected president of the 72nd UN General Assembly, as quoted by the TASR newswire, “these are all UN priorities and my priorities in the post. I cannot imagine a successful UN without the active and visible role of Germany.”

“Germany will financially support your work and it also agrees with your agenda, particularly concerning the building of peace and the preventive solutions to conflicts,” Gabriel said, as quoted by TASR. “It is really necessary to strengthen the role of the UN.”

The two ministers also signed a memorandum intended to deepen the cooperation between the two countries. It creates the conditions for creating a system of regular political and expert consultations and mutual coordination at the level of ministers and top state officials. It is open not only to ministries, but also the municipalities as well as the parliaments, Lajčák said.

Though the list of areas in which Slovakia and Germany can cooperate has not yet been finished, it is clear they will work together mostly on European topics.

“The finance ministries may deal with the economic and monetary union, the interior ministries may work closer together on the fight against terrorism, and the labour ministries on the social agenda which is also being discussed on the EU level,” Lajčák said, as quoted by the SITA newswire.

Following the memorandum, the two countries will prepare an action plan that is expected to be ready by the end of this year.

“By signing a memorandum we made the first step towards broadening our relations and giving them a systemic foundation,” the Slovak foreign affairs minister added, as quoted by SITA.

Slovakia and Germany are linked by their interest in having strong industry, especially the automotive sector, Gabriel said. The two ministers also discussed dual education, and European issues, including the discussion about the EU core, SITA wrote.

Lajčák also visited the Volkswagen plant in Wolfsburg during his visit, saying that the carmaker is one of the best examples of close cooperation between the two countries.