Slovakia also has Cities of the Reformation

The idea of the Community of Protestant Churches in Europe to emphasise to the impacts of the Reformation. 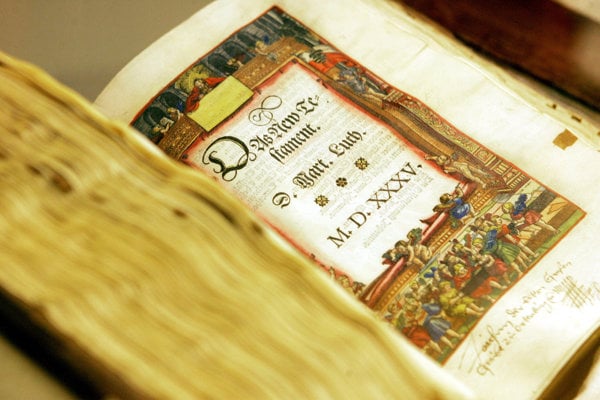 A New Testament by Martin Luther on display at the German Historical Museum in Berlin. (Source: AP/TASR)
Font size:A-|A+4

Ten Slovak cities received commemorative medals on the occasion of the 500th anniversary of the Reformation in late March 2017 from the representatives of the Community of Protestant Churches in Europe.

In addition, they were granted the title European City of the Reformation, the TASR newswire reported.

“I appreciate the cooperation with representatives of all Churches active in our town and I dare say that it is good,” said Ján Nosko, mayor of Banská Bystrica, one of the awarded cities, as quoted by TASR.

He supported the idea of the Community of Protestant Churches in Europe to emphasise to the impacts of the Reformation, and said that Banská Bystrica with its rich Reformation history is a good example of this. The city was among the first that accepted this religion.

“I believe that by receiving the title European City of the Reformation we are reminded of the great impact and diversity of the European Reformation that deserves our attention,” Nosko added, as quoted by TASR.

The ceremony was accompanied by a festive service held in the Evangelical Church in Banská Štiavnica, which was also attended by German Ambassador to Slovakia Joachim Bleicker.