Coca-cola as detergent or a battery filling is a hoax 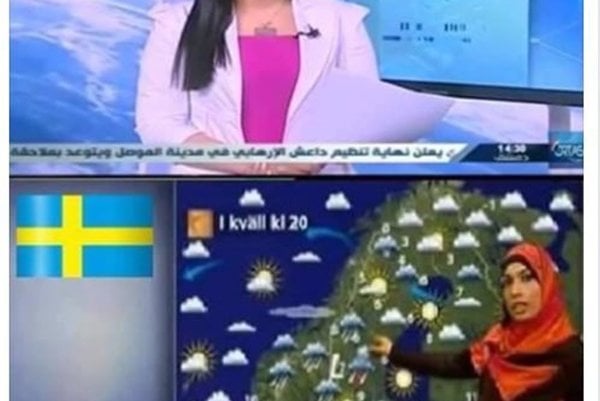 A manipulative picture comparing alleged televised weather forecasts in Syria and in Sweden is circulating on nationalist Facebook groups. Currently, the group Alternatívna Pravica Slovensko/The Alternative Right Slovakia is spreading it, for example, and it has earned dozens of likes and shares.

The stills come from a video spread on the Youtube server in several copies. The Snopes.com website which discredits internet hoaxes shares the pictures. 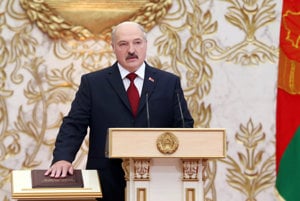 Read also: Standard of living in Belarus is better than in Slovakia is a hoax Read more

The weather forecast from Sweden in the picture is not a standard show broadcast on Swedish TV. Rather, it comes from the experimental broadcast of the Halal TV channel, which in the past offered three Muslim women the chance to host news from their personal viewpoint. The programme ended after eight episodes, and the snapshot in the collage dates back to 2008. A common weather forecast on Swedish TV looks like this, for example:

Am immigrant ignited the hair of an Austrian pensioner – since she was not wearing a hijab. We are at home here, not them!

These are Czech and Slovak comments under a photo of a woman with burnt hair and back of her jacket that is spreading on Facebook. The Facebook site Odmietam Kvóty pre Prijímanie Prisťahovalcov do EÚ / I Refuse Quotas for Accepting Immigrants to EU secured hundreds of interactions for it, and the AntiSlniečkar website put an identical photo on Facebook. They both wrote that an immigrant did this in Austria on September 26, 2017.

The information with the photo seems to be trustworthy, but it is hard to find any source outside of Facebook confirming it. Its author seems to be the Facebook account Karl Binder, which describes the picture in German as “an attack by a kid with dark skin” on a female pensioner on Märzgasse Street. The post is dated September 25, 2017. 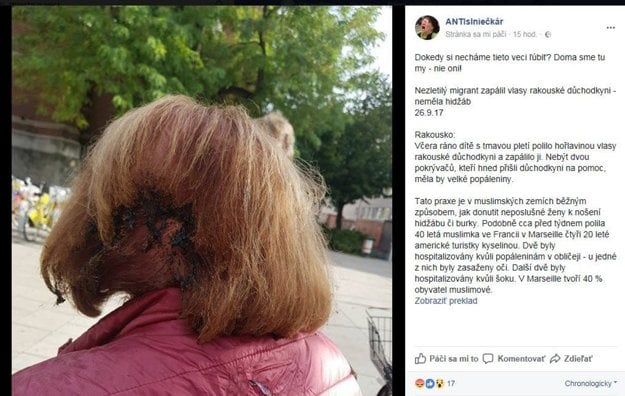 The pensioner in Vienna suffered real injuries and damage; but police have not even determined a stranger's attack. (Source: Facebook)

Austrian website mimikama.at which checks on internet rumours published the comment of Vienna police which confirmed that the incident in which the hair and back on the jacket of a woman in Vienna street Selzergasse caught on fire did happen.

However, police specified that neither the victim, not witnesses were able to determine who the suspected attacker was, nor is it sure whether it was an attack or just an accident of negligence throwing away of a cigarette.

The investigation is ongoing, and a possible attack has not been excluded yet. However, rumours that it was committed by an immigrant because of the unveiled hair of the woman are unsubstantiated.

Coke is not healthy, but legends describing it as detergent are a hoax

The Stop Coca-cola! Once You Read This You’ll Never Drink Coke Anymore story published in July on the tabloid Včas.sk website suggests that rather than a healthy drink, Coke is fitting as a detergent and universal means for household chores. It can also be used in a garage, in the garden and for various works around the house, the story suggests.

“After you realise what it can remove, for example, maybe you will realise what it does to your body,” the story continues. The website informs that apart from causing weight gains and health issues, its acidity is so high that it ranks Coke among the best-quality detergents and even as a replacement for acid in some batteries. Also, it can be used as a pesticide for snails, or a cleaner of rust, calcium deposits, fat and hair dye, or to remove chewing gums, or dissolve a tooth, etc. 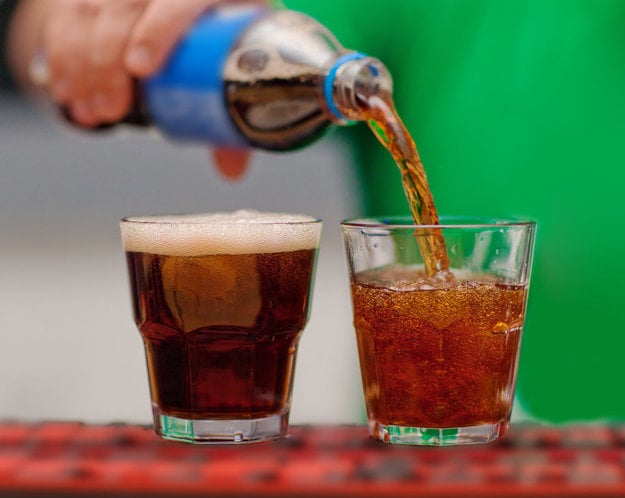 The core of Cola-like drinks ar enot healthy; but htey are surrounded by too many bad rumours. (Source: Fotolia)

David Mikkelson of the Snopes.com website checked on the claims and finds that almost all carbonated drinks contain carbonic acid, and while Coke also includes some other acids, they are not harmful, especially due to their capacity, or concentration. The gastric acid is much stronger, and it can easily absorb all of them. Also, people do not keep Coke in their mouths for hours or days, so the effect of acids contained in it is only of a short term.

Especially in the US, rumours and legends that evolve around Coca-cola are so popular and numerous that folklorist J. H. Brunvand uses the term “cokelore” and ascribes it to the subconscious worries and fears of multinational corporations who are market leaders. Also the uniformity of diets and world-wide spread of some brands which can force out local customs help keep these fears alive.

Thus, the story is a mixture of arbitrary views and various popular rumours.