The anti-fascist march in Banská Bystrica attracted about 300 to 350 participants. 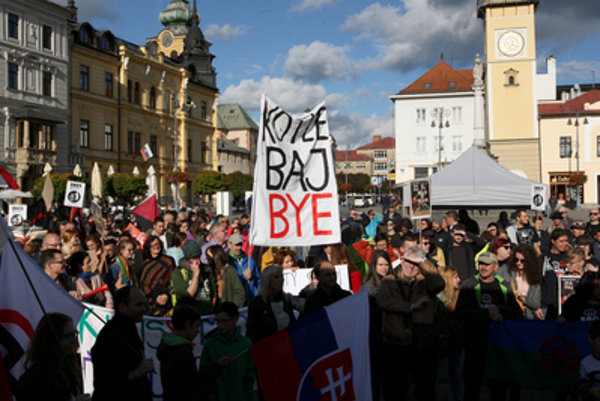 The Not in Our City initiative, which emerged in reaction to the election of far-right People’s Party Our Slovakia (ĽSNS) chairman Marian Kotleba as Banská Bystrica regional governor in 2013, organised an anti-fascist march on October 7. Around 350 people participated, the TASR newswire wrote.

Marching under banners such as Love Instead of Hate, the organisers pointed to what they described as growing radicalisation and extremism.

“We ordinary people, members of the Not in Our City platform, believe that this isn’t the way to go,” platform coordinator Martina Strmeňová told TASR. “Tolerance, on the other hand, is the right way.”

Kotleba is running for re-election in the November 4 vote, and it seems that his most serious contender will be businessman Ján Lunter. The latter has already received broad backing from several political parties and former contenders who have withdrawn from the race in order to increase his chances against the incumbent governor.

The protesters went from the local site of Hušták to SNP Square to express their stance against fascism and intolerance, the My – Naša Bystrica regional newspaper wrote on that day. They also chanted We Are More Together and Kotle-Bye, Bye before the office of the Banská Bystrica region.

The protest march is a reaction to demonstrations of extremism in society, the regional paper wrote, adding that it is a clear signal before the regional vote that people in the region are refusing a repeat victory by these forces.

Activists and bands speak up

The groups and speakers who came to support the event include singer and activist Jakub Pohle, Michal Karako of the Forgotten Slovakia civic initiative, the evangelical theologian Ondrej Prostredník, head of the local Divadlo Štúdio Tanca theatre Zuzana Ďuricová-Hájková, as well as others.

Not in Our City, an informal association of activists and organisations engaged in developing freedom, tolerance and human rights in Banská Bystrica, is convinced that under the current complex circumstances, one cannot simply passively wait for action by politicians and candidates steps. All society should resound with a clear dissatisfaction at the spreading hatred and fascism, My –Naša Bystrica wrote.