Nitra fails to pick a strong candidate against extremist

The coalition and opposition dispute over choosing a single person who could defeat Milan Uhrík of the ĽSNS. 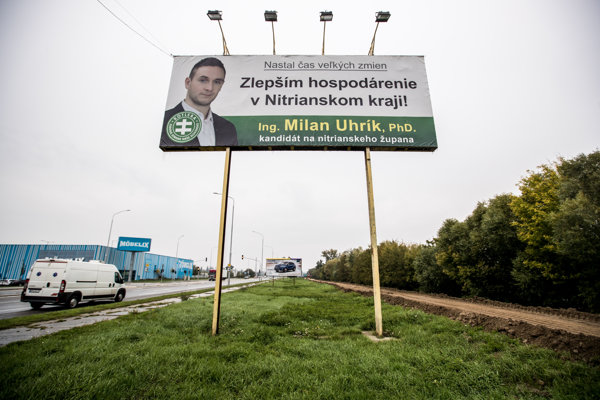 The so-called Hungarian card has united the coalition and opposition parties in the Nitra Region in the past, resulting in the support of a single, strong candidate. This time, not even the fear of the victory of an extremist candidate, Milan Uhrík of People’s Party – Our Slovakia (ĽSNS) seems able to create a broader coalition.

First, the coalition of right-wing parties Freedom and Solidarity (SaS), the Ordinary People and Independent Personalities (OĽaNO), the Christian Democratic Movement (KDH), NOVA, the Civic Conservative Party (OKS), Šanca and the Democrats of Slovakia, called on the other parties to join forces and choose a joint candidate for the Nitra Region’s governor post. They planned to follow the example of Banská Bystrica where two candidates withdrew from the race in favour of one strong candidate.

They proposed Ján Greššo to represent the broad coalition to stop the spread of extremism, the TASR newswire reported on October 9.

The coalition of Smer, the Slovak National Party (SNS) and Most-Híd, however, refused to withdraw their candidate, incumbent Milan Belica.

Subsequently, the SNS called on Greššo to withdraw from the race, claiming that Belica is the strongest candidate.

Danko promises to pay for the poll

“I think that several polls will soon confirm that Belica is the strongest candidate,” Danko told the October 12 press conference, as quoted by TASR. “I believe that if these trends are confirmed, Greššo will think about his candidacy.”

He also promised to contribute to the poll that will be carried out by any renowned agency Greššo picks.

This year’s regional elections may decide on the composition of the parliament after the 2020 general election and the government, Danko added.

He also claimed that his party has already made some concessions. Originally, they wanted to nominate their own candidate, Eva Smolíková. She, however, re-evaluated her candidacy and the party supported Belica instead, as reported by TASR.

Greššo responded that he does not need Danko’s advice or recommendations.

Currently, there is no poll that would indicate the chances of the candidates. According to one of the older surveys, the four strongest candidates for the governor post are Belica, Uhrík, Iván Farkas and Greššo, as Tibor Glenda of Smer told the Pravda daily. He added that currently, a second poll is being carried out, which will provide better information on the current situation.

Two of the most renowned polling agencies in Slovakia, Focus and MVK, have not conducted any poll in the region yet. Sociologist Pavel Haulík of MVK says it is a mistake for the political parties to not know much about the situation in the region, Pravda reported.