Trade unions will march for earlier retirement on Saturday

Slovakia’s population is ageing intensively. Later retirement is one solution 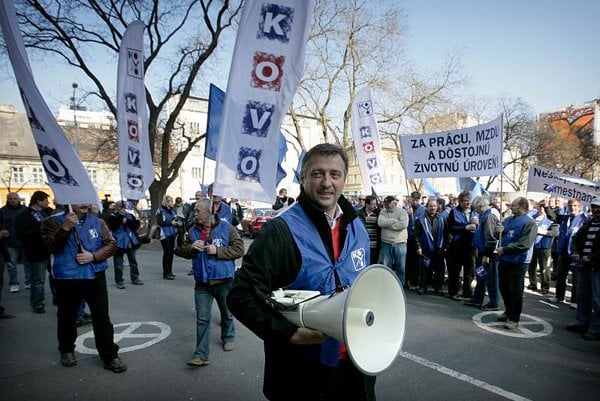 The country-wide metallurgy and engineering trade union KOVO will march and rally for earlier retirement on Saturday, October 14 in Bratislava. About 2,000 people are expected to take part in the action, marching from the Government Office’s building to the Labour, Social Affairs and the Family Ministry building, informed KOVO chief Emil Machyna.

KOVO is seeking a change in the current pension scheme, chiefly halting the prolongation of the retirement age and creating the possibility of earlier retirement without people having to cut the sum of their pension.

“People are working more and more”, said Machyna as cited by the TASR newswire. “Labour productivity is growing, as much as profitability is. Slovakia shows the highest share of overtime and weekend work, as well as work in a non-stop operation out of all the EU countries. That’s why we want to assert the possibility of an earlier retirement for people working in non-stop operations or at risky workplaces.”

KOVO wants to call on the Labour Ministry to start working on legislation that would cap the retirement age and the so-called pre-pension. It suggests setting the upper retirement age in law at 64 years. It has already launched a petition for early retirement. Some 14,000 signatures have already been collected and KOVO’s aim is to collect 110,000 signatures.

The development of population processes in Slovakia clearly confirms the intensive ageing of the population, which is manifested by the increase of the number of people of post-productive age and a reduction in the share of the population in childhood.

“The age structure development isn’t positive and it clearly shows ageing,” said Alexander Ballek, head of the Slovak Statistics Office at a press conference in Bratislava on May 25. He added that it has been partly caused by an increase in life expectancy of the population.

Population ageing is among the biggest demographic challenges in society at the moment. It also poses a threat to the current pension and healthcare schemes. Prolongation of the retirement age is one of the possible solutions.