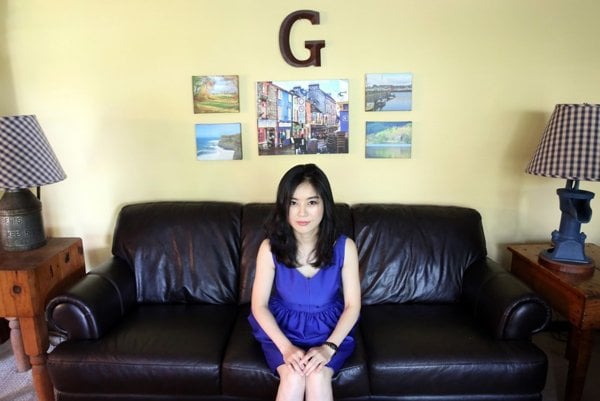 She chose her latest name herself. She wished to be called Sunshine and Good Fortune; she hoped that with a name full of light, she would avoid walking in shadows. She has already had seven names, and even more roles, and thus, her ambition of happiness is in fact as humble as she is herself.

For seven years, every day she spent outside North Korea she collected pieces of her old identity from the embers – to differentiate which of the layers hung on her is her true self and where her new skin starts. She fled a regime which now keeps the world edgy. However, her freedom is heavy; just like the freedom of all those who left their childhood, lullabies, family albums and the most precious things in their lives, their loved ones, behind borders lined with barbed wire.

On a September day in 2017, it was clear that she is not telling her story at the Athens Democracy Forum for the first time and that she knows that it does not belong to her anymore. She knew she spoke in the name of all those who could not flee. She did not come to tell anecdotes about Kim but rather to explain that her people in North Korea simply have no idea about freedom.

She tells her story in a foreign language. She searches for the right words that can convey her emotions; she does not have the freedom of an experienced speaker in English but she is authentic and her story strikes a visceral note with her audiences.

Now and then, she fails to understand the questions of the New York Times columnist Roger Cohen, moves towards him and asks him to repeat them, which he patiently does. She cannot use real names and she cannot stand before us with everything she is – as she would hurt her family.

“If the network of spies and denouncers learns that you do something against the country, your whole family vanishes in a single night without any trace,” Hyeonseo Lee, whom the North-Korean regime declares to be a prostitute selling her fabricated story to western media, says.

She saw her first public execution aged seven and explains that to common people unwitting of the real life outside North Korea, such a life can seem quite normal, including the executions.

When the host, Cohen, asks her whether the West should try to topple Kim's regime, she answers that a change of regime is the only chance for Korea: “People in Korea cannot imagine that someone other than the dear leader Kim could rule them”.