The newly set-up committee meant to prepare a law on the more detailed property disclosures of politicians is headed by ex-minister Martin Glváč from Smer, who is refusing to publish details of his assets. 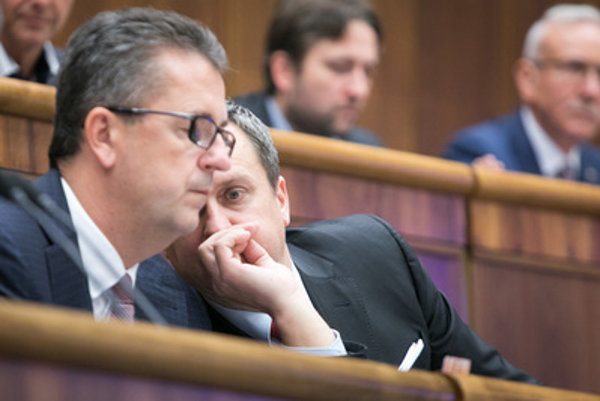 The property disclosures of politicians should be more detailed, and this requirement has been under discussion for years.

Recently, Speaker of Parliament Andrej Danko (of the coalition party SNS) ultimately set up an 11-member committee to prepare the respective constitutional law. However, he installed his deputy, ex-defence minister Martin Glváč from Smer, at its helm, though the latter keeps concealing details on his assets, the Sme daily wrote on October 17.

Glváč lives in an apartment constructed by the companies of the shady tycoon Ladislav Bašternák, recently prosecuted for tax evasion, which is officially owned by the Glváč family’s company.

For a long time the ex-minister has been refusing to reveal the amount they purchased the apartment for. The ethics watchdog Fair-Play Alliance called on Glváč to disprove possible suspicions of profiting on deals by his relatives. The former defence minister does not own the apartment himself, and thus he does not report it as property. It is owned by the company of his partner, Soňa Chanečková, and his father, aged 75.

“I’m sceptical about whether the working group will bring about results, particularly when it is being led by Mr Glváč," Veronika Remišová, an opposition Ordinary People and Independent Personalities (OĽaNO) party’s MP, said as cited by Sme.

It is naive to expect that as the chairman of the working group he will develop constructive efforts in this specific sphere to bring about greater openness and better control of politicians, added Remišová, who also sits on the committee. She also said that a similar working group was established during the previous government of the Smer party, but in the end, nothing came out of it.

The new rules for politicians’ property returns will disclose their thus far unknown business ties, or accepting gifts from entrepreneurs or lobbyists. Independent MP Miroslav Beblavý opined for Sme that the law should also stipulate that politicians’ mandates can be withdrawn for a repeated violation of rules. Danko and another deputy speaker of parliament, Andrej Hrnčiar of Most-Híd, have both failed to report loans for their parties in their property disclosures. If they did so again, MPs would automatically vote on them to be stripped of their mandates under the new law.

The new committee could meet next week for the first time. No plans for work on new laws have been set.

Danko has not explained the reasons for his choice of Glváč as committee head.