Who to blame for bryndzové halušky as the national meal

The ancestors of the Slovaks' wiped their mouths with the tablecloth, pigeons flying out of the pâtés served on tables. It was a famous Czech writer who romanticised “the meal of the poor”. 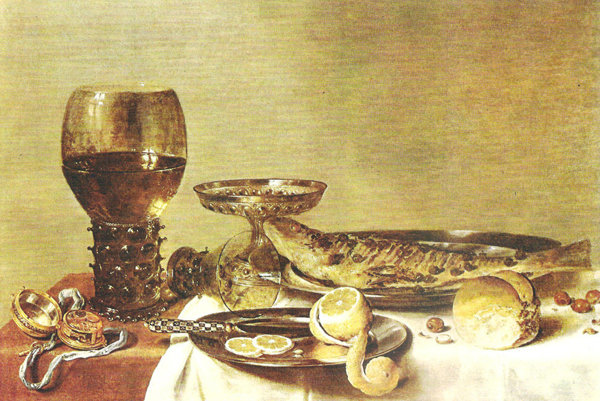 Food of ancestors was by no means dull; llustrative photo of Pieter Claesz's painting from 1635. (Source: From the book "Everything about a Table" by Z. Mintalová-Zuberová; )
Font size:A-|A+

The diet of the inhabitants living on the territory of current Slovakia was by no means simple or monotonous, expert on culinary history, Zora Mintalová-Zubercová, said for the Sme daily.

In the 18th century, it was mainly top chefs who were the celebrities here. All the important people tried to win them over. The chef from Blatnica Castle was even kidnapped in 1721, and taken to Lower Hungary.

“Count Révai track him down and brought him back,” says the ethnologist, historian and museologist Zora Mintalová-Zubercová, specialising in the culinary history of central Europe.

Feasts were magnificent occasions as early as the 14th century when only men were allowed to attend them, with almost no exceptions. The tables in the knight’s halls were solid, to survive boisterous celebrations.

Later, tablecloths became an important part of dining. If the court master of ceremonies cut someone’s tablecloth, he had a huge problem: “This was equal to declaring war, animosity, something like throwing one’s glove to provoke a duel – a ritual used only several centuries later,” Mintalová-Zubercová describes.

Precious tablecloths with woven decorations were imported from Italy. They were also made here, for example in Košice, Bardejov and Bratislava. “When daughters of the Hungarian palatine Thurzo were married, one received a hundred, and the other one hundred eighty tablecloths,” the ethnologst explains.

The first tool for eating was a knife, not a spoon or fork, and every man carried one on himself at all times. This does not mean diners were too clean.

“They were able to put food in their mouths when skewered on a knife but they still made themselves messy, with greasy fingers and chins. After the meal they wiped their hands on tablecloths, jackets or trousers,” Mintalová-Zubercová says.

Diners used to throw bones – and everything they did not like – under the table for hound dogs.