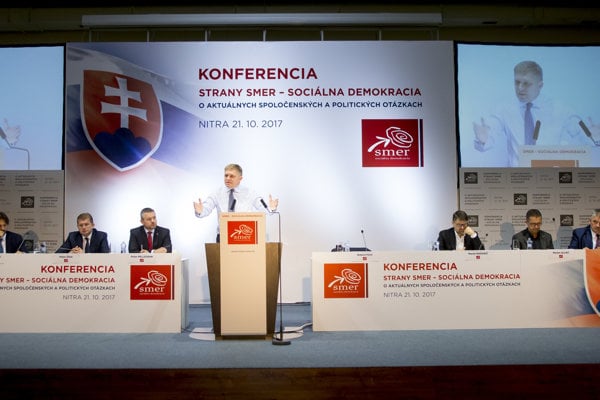 One result of the EU fund scandal at the Education Ministry and the following ruling coalition crisis is the approach to the fourth social package from Robert Fico’s cabinet. In order to achieve peace in the coalition, measures from each ruling party have been included in the package. The package features 13th and 14th salaries, an increase in minimum wage, exempting working pensioners from the payment of income taxes, an increase in bonuses for night and weekend work and more.

The business sector is especially critical about the increase in the minimum wage and work surcharges. They lack impact studies and claim that many changes from the package will be paid not by the state but by companies.

The package obtained greater precision when Prime Minister and leader of the strongest ruling coalition party Smer, Robert Fico, introduced its measures at the party conference in Nitra on October 21. The slogan of the fourth package, whose price tag will be €250 million, is better remuneration for performed work.

“When should we share the good economic condition of Slovakia with people if not during the times we thrive?” asked Fico in response to calls urging the government to reduce the budgetary deficit and the general government debt.

Labour Minister Ján Richter (Smer) specified that the objective of the measures is better remuneration as the economic development creates sufficient conditions for mirroring the increasing profits of companies in growing wages.

“Slovakia’s absolute costs of labour are the seventh lowest in the European Union,” said Richter as cited by the SITA newswire. “When we compare wages in Slovakia via real purchasing power, only four EU countries are worse off than we are. This is despite us being the absolute leader in added value growth not only in the EU but also within OECD countries.”

Some package measures have already been adopted. Earlier in October the government passed the rise of the minimum wage by €45 or 10.34 percent to €480 from January 2018. The plan is to increase it further to €500 in 2019.

Most-Híd pushed a measure reducing payroll taxes for working pensioners into the social package. This means that the first €200 earned by a pensioner working under temporary employment agreements (known as ‘na dohodu’) will be exempt from payroll taxes. Parliament agreed to this exemption before the Smer conference on October 19.