Evangelical Church commemorates the 500th anniversary of the Reformation

The year-round religious, social and cultural events commemorating the 500th anniversary of Reformation culminate on October 31. 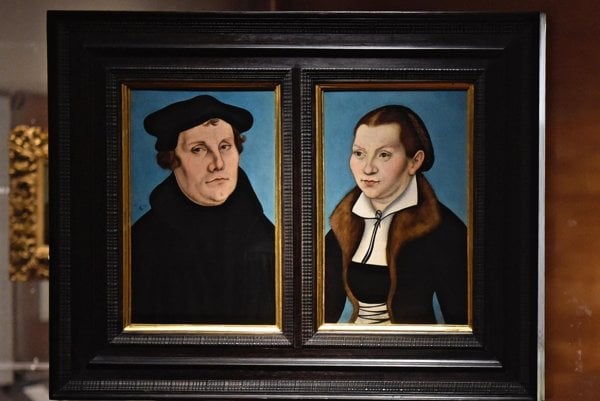 Portrait of Martin Luther and Katharina Von Bora by Lucas Cranach the Elder, is on display as part of the exhibition on Reformation at the Uffizi Gallery in Florence, Italy. (Source: AP/SITA)
Font size:A-|A+

The Day of the Evangelical Church of the Augsburg Confession (ECAV), October 31, marks the culmination of missionary and other events connected to the 500th anniversary of the Reformation.

This day will see a Festive Service at 15:30 in the Evangelical Church of the Holy Trinity in Bratislava-Petržalka, the SITA newswire wrote. Apart from Evangelical believers from all over Slovakia, neighbouring religious communities in Austria, representatives of state, of the diplomatic corps established in Slovakia, and ecumenical and evangelical churches from abroad will take part. The festive sermon will be conducted by the General Bishop of ECAV Miloš Klátik.

Other events include the inauguration of the special postage stamp marking the anniversary (by artist Dušan Kállay and engraver Martin Činovský), and the opening of the Embroidered History of the ECAV in Slovakia exhibition composed of 16 artworks embroidered for this occasion. Both are taking place in the Slovak National Theatre’s (SND) new building, before the festive mass. The post office box will be open for the public between 14:30 and 15:30; while the exhibition lasts until December 31.

There will be a festive academy on this occasion in the SND’s historical building, at 18:00. At 19:30 the premiere of the spiritual opera, Hrad Prepevný by composer Víťazoslav Kubička will begin, performed by the Symphonic Orchestra of the Slovak Radio conducted by Adrián Kokoš, with soloists Marianna Gelenekyová, Andrea Hulecová, Roman Krško and Peter Šubert, the RTVS Girl’s Choir , the Anima Cantanda mixed choir, the Antanda mixed choir and the mixed choir of the CZ ECAV Kežmarok.

On October 31, evangelical Christians worldwide commemorate the day when theologian Martin Luther hung the 95 Theses openly opposing the papal teachings on indulgences, on the door of the castle church in the German city of Wittenberg in 1517, SITA wrote. The Reformation ranks among the globally important events that impacted not just religious but also social developments.