Moratorium before the elections starts

No form of political campaign, ads or polls can be published until polling stations are closed.

The official election campaign of candidates running in the November 4 regional elections has ended.

The law stipulates that the moratorium starts 48 hours before election day, i.e. from November 2 midnight, and ends after the polling stations close on November 4 at 22:00. During this time it is prohibited to publish information about the candidates, either in their favour or to their disadvantage.

No campaigning or publishing of polls

Though the law does not order the removal of posters promoting the candidates, which were posted before the moratorium’s start, new ones must not be posted in public spaces, Eva Chmelová, chair of the Interior Ministry’s department on elections, referendum and political parties, explained to the SITA newswire.

The ban applies to all forms of campaigning, including one run on the internet or via short text messages. 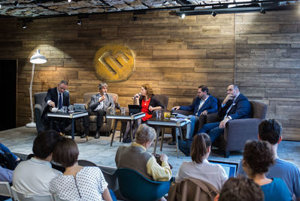 Read also: Who are the Bratislava region candidates? Read more

“The ban on publishing internet content after the election campaign’s end applies to all kinds of information and services that are usually paid, like ad banners or direct mail,” Chmelová said, as quoted by SITA.

Ordinary internet communication and free-of-charge posts on social networks and other internet forums on which no fee is charged are not banned during the moratorium, she added.

The law on election campaign also sets conditions for publishing the preference polls. The last ones could be published on October 21.

The law also prohibits the broadcasting of political ads on radio and television. Not even broadcasters using only the internet and providers of media on-demand services can broadcast any form of campaigning during the moratorium.

When will the first results be published?

The regional election, in which voters can choose a regional governor and deputies for the regional parliaments, takes place on November 4, with polling stations opened between 7:00 and 22:00.

The voters, including foreigners, from a total of 2,927 municipalities will choose altogether 416 regional deputies and eight regional governors, the TASR newswire reported.

The first preliminary results will be published on two websites (www.volbysr.sk and www.statistics.sk) shortly after 22:00.

The official results will be published and confirmed on November 5.