PM Fico does not admit defeat in regional election

After almost a week, Robert Fico comments on the results of his party in regional elections, claiming it as a success. 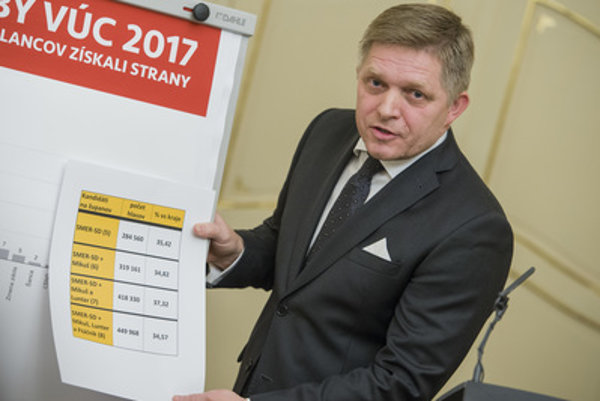 Prime Minister Robert Fico waited for almost a week before he commented on the results of his party in the regional elections, the Sme daily wrote on November 11.

Instead of focusing on having just two regional governors – and not six as in the last election (out of totally eight) – PM Fico stresses that his party has garnered 88 regional councillors in total, allegedly the highest number among all parties. Because of this, Fico claims his is the winning party. No political project has been more successful than Smer in the history of modern Slovakia, Fico stressed on November 12 in a televised talk show.

He would have liked to have seen his party obtain more governors and regional councillors following the elections last week, but the prime minister noted on November 10 the result was due to the majority electoral system and hardly anything could be done about it. He spoke at a special press conference and also on the public-service broadcaster Slovak Radio, explaining that he took an intentional break in order to observe the atmosphere.

Fico: No need to face consequences

There are no plans to give consequences to party vice-chairs, Fico noted, adding that there was no reason to hold Smer vice-chairs accountable for the elections. Changes at other levels should not be ruled out, he said. Smer will hold a congress in December which is expected to bring more clarity to the issue.

However, some other top Smer politicians, like Culture Minister Marek Maďarič or Deputy PM Peter Pellegrini, have already said personnel changes are necessary. Fico, in this context, said that he respects the views of his party colleagues, as “everyone has the right to express their vision of the world”.

The opposition claims Fico is unable to admit defeat and resembles the infamous ex-PM Vladimír Mečiar and his HZDS party, Sme wrote.

Instead of conceding defeat in the recent regional elections, in which only one Smer member was elected governor (Jaroslav Baška in Trenčín Region), Fico has attempted to cover up the debacle by pointing out the number of Smer councillors elected throughout the country, opposition OĽaNO MP Veronika Remišová said on November 10, as cited by the TASR newswire.

“In the last elections, the opposition had one governor; now we have five,” the opposition SaS party reported, as quoted by the SITA newswire, adding that while Smer got 88 councillors, the joint opposition parties of the democratic right received 105 councillors.