Slovaks ended the year with a victory

The Tuesday friendly match in Trnava meant a farewell to Slovak centre-back, Ján Ďurica, who ended his national team career with his 91st match. 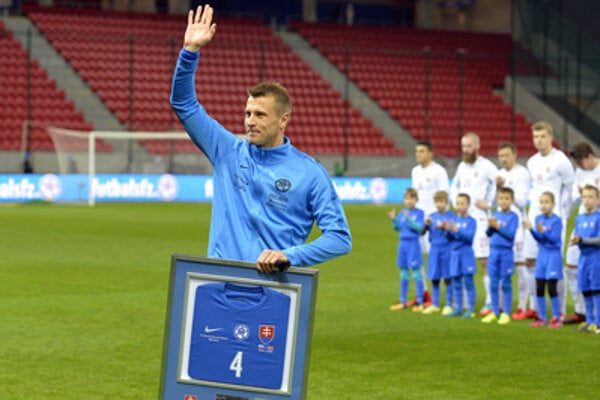 The international friendly match between Slovakia and Norway on November 14 in Trnava saw a single goal by Slovak Stanislav Lobotka in the 93rd minute. The duel was the last match of 2017 for the home team, ending with a victory for Slovakia, the Sme daily wrote.

The whole event was marked by the departure of Slovak centre-back, Ján Ďurica, leaving the team after this 91st match of his national career.

The Slovak team, led by coach Ján Kozák, played eight official matches this year, achieving five victories and three defeats. However, they failed to make it to the play-off round of the World Cup 2018 in Russia, which was their main goal.

Ďurica cried during the Slovak anthem and for his last match he received the captain’s armband and was officially bid farewell by Slovakia's football officials.

The game was neither fast nor full of surprises in the first half, with one direct kick by Norwegian Nordtveit who only hit a Slovak defensive wall. In the second half, the Slovaks were more offensive and had some chances which were not used to score a goal. But in extended time, Stanislav Lobotka scored one Slovak goal, with the help of a goal post.