The 1989 revolution, which toppled communism in Czechoslovakia, is perceived positively by 53 percent of people, while 19 percent see it negatively, according to a poll. 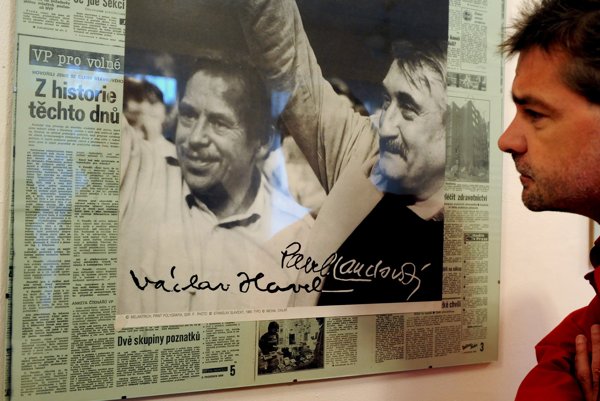 Exhibitions, discussions and other events try to commemorate the 1989 toppling of communism. (Source: TASR)
Font size:A-|A+7

The Velvet Revolution, which started on November 17, 2017 1989 and toppled communism, was a positive event, 53 percent of Slovak inhabitants think, while 19 percent perceive it negatively. This stems from a poll ordered by the Institute for Public Affairs (IVO) and conducted by the Focus polling agency between October 4 and 10, based on 1,003 respondents.

Most often, people aged between 25 and 54, along with college graduates, deem the November 1989 revolution as benefiting the country. Also qualified people like clerks, creative experts, business people and the self-employed see it as a good thing. Among the politically inclined, mostly voters of the opposition parties Freedom and Solidarity (SaS) and Ordinary People and Independent Personalities (OĽaNO) are like-minded, as well as supporters of Slovakia’s EU membership.

“And also people who highly respect traditions of the first, non-communist Czechoslovak Republic (ČSR), and those who are of a rightist political inclination, as well as liberally inclined citizens,” Zora Bútorová of IVO told the TASR newswire.

As for regions, mostly inhabitants of Trnava and Bratislava Regions tend to see November 1989 positively. On the other end of the scale are Košice and Banská Bystrica Regions.

People aged over 65 are the most negative, as well as unqualified manual workers, people with elementary education, the unemployed and pensioners.

“Also the voters of ĽSNS and Smer, critics of Slovak EU membership, those who feel the establishment of ČSR, leftists and people preferring conservative values,” Bútorová added.

IVO compared the current results with older polls, and it turned out that between 2009 and 2014, “considerably fewer people evaluated the Velvet Revolution positively”. After 2014, their number has been increasing slightly, TASR cited IVO.