A company promises in its ad to offer household helpers who are hardworking and discreet. 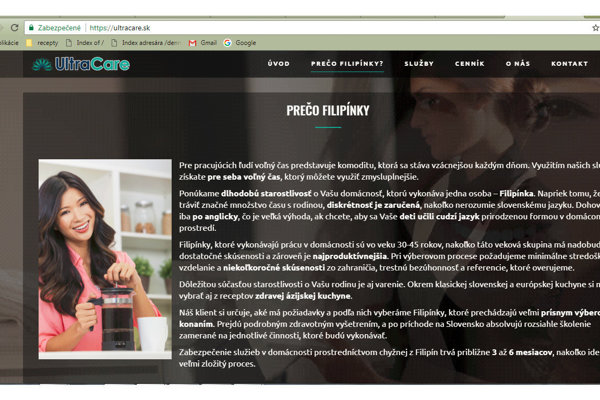 “We will provide long-term help for your household and many other services performed by a single person – a Filipino woman,” reads the advertisement published on the UltraCare.sk website.

The ad claims that women from the Philippines are described as very hardworking, discreet, loyal and humble. One of the advantages, as described by the ad, is that they have no ties in Slovakia and are available when needed.

The Advertising Standards Council, an advertising ethical self-regulation body, has confirmed it received one complaint concerning the ad. It will now scrutinise the motion, focusing on the ad’s decency and social responsibility, the Denník N daily reported.

The first to point to the ad was the Sexistický Kix website, which informs about non-ethical advertisements. It considers the ad “sexist, racist and probably – at least we hope – violating the law”, as Denník N wrote.

“The company is using dehumanising language that creates the impression that not services, but human beings are for sale,” Diana Gregorová of Sexistický Kix told Denník N.

The language used in the ad is problematic, adds Zuzana Števulová from the non-governmental organisation Human Rights League.

“It makes me feel like they were offering ‘goods’, not employees with whom one will sign an employment contract and who maintain their autonomy and rights,” Števulová told Denník N.

Martina Medňanská, who communicates for UltraCare.sk, says there is a big interest in these services in Slovakia. The company is just launching its services and is currently expecting the first Filipino women expected to undergo training.

“Filipino women are among the most desired in the world,” Medňanská told Denník N. “This is confirmed by Russia, Scandinavia and Canada. They want Filipinos in particular.”

One of the reasons may be that they are Christians. Moreover, entire generations are used to this kind of work, and the women have the best references, she added.

UltraCare.sk is administered United Management Group, which collaborates with an agency in the Philippines that helps choose a suitable women. The plan is for them to work for minimum wage in Slovakia, currently amounting to €435 (but increasing to €480 next year).

The agency offering household aid from the Philippines explains that it did try finding suitable people in Slovakia, but its attempts failed. They published several ads a few months ago, offering a job at minimum wage, but they required an advance level of English, a certificate or a reference concerning household care, Denník N wrote.

Five women answered the ads, but they did not speak English, Medňanská said.