A hiker found a skull, attached to a skeleton, in archaeologically rich Kostolec. 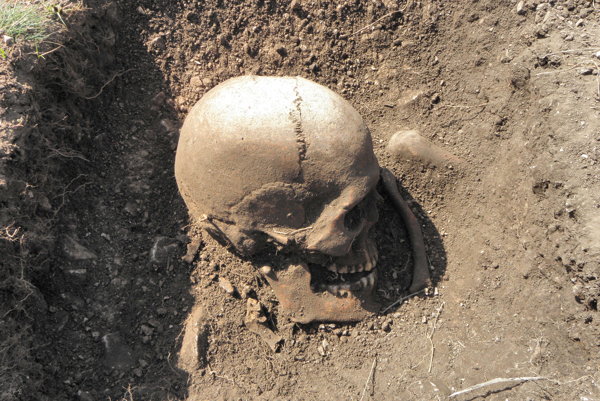 Hikers were stepping on a skull sticking out of the ground on marked hiking terrain for several days in the town of Kostolec, between the villages Ducové and Hubina. The skull was full of soil and that’s why it was able to resist thousands of feet stepping on it. Nobody paid attention to the shape of stone, until one tourist, Štefan Kubovčík, stopped and wondered why the stone was so regularly shaped and had sutures.

He notified the Regional Monument Institute (KPÚ) Trnava and his suspicion that he found mortal remains was confirmed. Archaeologists first dug out the skull and then the whole skeleton from an untouched grave, where the human was buried in a crouched position.

“We are thankful to the attentive visitor to Kostolec for this finding. It’s interesting from a number of points of view,” said archaeologist from KPÚ Trnava Peter Grznár for the TASR newswire. Archaeologists cannot say with certainty from what era the skeleton originates because there was nothing in the grave to help to identify its age. 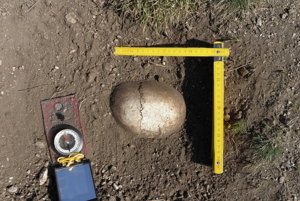 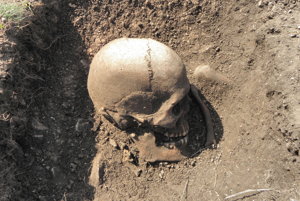 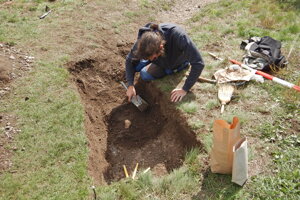 Kostolec used to be a place for burials in the younger Bronze Age (from 1300 to 1900 BC) during the time of a settlement of the Velatice culture. After a long break, it was also used during the Middle Ages from the second half of the 9th century until the middle of the 15th century, and in the new age from the end of the 16th century until the beginning of the 19th century. In the case of this grave, two options are most probable.

“It could be a prehistoric grave from the Bronze Age, which would explain the crouched position of the skeleton. If that is true, the area of the prehistoric settlement was bigger than we thought,” said Grznár for TASR.

“The second possibility is that the skeleton is of Middle-Age origin and in this case would be a human buried at the edge of a proper burial ground, proof of the social expulsion of the buried person,” continued Grznár for TASR.

Finding graves this way is considered to be a rarity, according to archaeologist Matúš Sládek from KPÚ. In 2017, four citizens reported finding a skeleton to KPÚ.

“In Kamenný mlyn in Trnava, Modranka, Senica and now in Kostolec,” he said as cited by TASR. In previous years, there was usually only one just finding.

He thinks that the increase could be caused by better education and the fact that a finder may get one hundred percent of the assessed value. However, it is not possible to assess the value of a skeleton.

“Štefan Kubovčík won’t get a finder’s fee either. But he was present while research was underway, together with his daughter,” added Sládok for TASR.