Messerschmidt created most of his character heads in Pressburg

Bratislava will name a square after the prominent artist 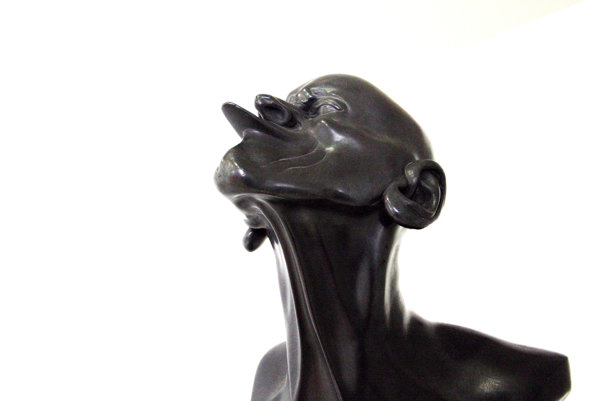 A replica of one head from the series Character Heads by F. X. Messerschmidt; ownership of the Slovak National Gallery (Source: Sme)
Font size:A-|A+

The sales of works by the sculptor Franz Xaver Messerschmidt created a sensation when, for example, the Louvre paid $4.8 million for one of his character heads at a Sotheby’s auction back in 2005. In spite of this, few people know that the famous sculptor created most of the busts with grimaces during his final years in Pressburg, now Bratislava.

The house in which he lived was needlessly pulled down, his grave is unknown and even the street bearing his name was re-named long ago. Only a café on SNP Square called Franz Xaver Messerschmidt commemorates him. This should change since the central square of the new Zuckermandel development will be named after the prominent artist.

“His oeuvre, especially the final part, is unrepeatable in the history of art,” said Katarína Chmelinová, curator at the Slovak National Gallery, which holds a series of replicas of the busts. “Messerschmidt outdid his contemporaries and became a strong source of inspiration for other artists, not only during his time, but also the present.”

Who was F. X. Messerschmidt?

Franz Xaver Messerschmidt was born on February 6, 1736 in Wiesensteig near Ulm, in present southern Germany. He obtained a conventional artistic education, studying sculpture in Munich and then Vienna at the Academy of Fine Arts.

From a young age, he managed to draw attention to his work. At 24, he was commissioned to create gold-plated bronze busts of the imperial couple Francis I of Lorraine and Maria Theresa.

It was these excellent early works that secured him further commissions. Messerchmidt first created his works in the late Baroque style, later becoming inclined toward a new style of classicism.

Messerchmidt soon became a sought-after artist, from whom the personalities of the time ordered their sculptural portraits.

His downfall came sometime after 1770. At that time, a series of reports on the artist’s successes were suddenly interrupted and silence befell his life for the next few years, Mária Pötzl-Malíková, an expert on F. X. Messerchmidt’s work, writes in her book F. X. Messerschmidt and the Mystery of his Character heads. Later, in 1774, the council of the Vienna Academy of Fine Arts refused to appoint him as professor.

The 38-year-old artist was already suffering from psychological problems, according to available information.

In 1775, the artist left Vienna forever and allegedly packed some character heads in his luggage. He first went to his native Wiesensteig and later to Munich. In the end, he settled in 1777 in Pressburg with his brother John Adam, who was two years his junior.

After three years of a life full of conflicts with his brother, Messerschmidt bought the U Jeleňa house on present day Žižkova Street in 1780. He lived and worked here while devoting a great deal of energy to his private project until his death – the creation of busts with grimaces.