The social package of the governing Smer party, which includes higher surcharges for night, weekend and holiday work, will cost employers in Slovakia around €1 billion. The National Association of Employers (RÚZ) expects that the package will have a negative effect on the already established motivation schemes of individual companies, as the current bonuses will be absorbed by the social package and the cost uncertainty that it brings to the employers. RÚZ vice-president Luboš Sirota informed about employers’ concerns on November 27.

Employers require that the state should also share the favourable macroeconomic situation with employees. They propose their own measures, especially cutting the tax burden of employees and thus reducing tax revenues for the state.

“Employers do not question the fact that employees in Slovakia should earn higher net salaries,” said Sirota as cited by the TASR newswire. “However, it’s absurd and unacceptable if this happens behind the back of those who should pay it.”

Sirota pointed out that social packages accompany the falling popularity of governing parties.

“Employers cannot pay them every year,” said Sirota. “The situation now is even more complicated because we have three parties in the government. This is more about politics than about the exact issues we would like to address. The basic problem is that we cannot endlessly leave it up to employers to pay it.” 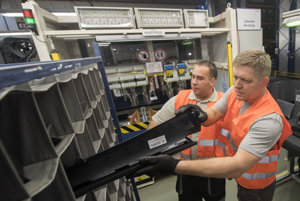 RÚZ demonstrated the impacts of the social package on a model family with a baker working night shifts and a shop assistant working during weekends with one seven-year old child. In this case the family’s monthly net income would increase by €135.

The association proposes its own four measures, which would increase the income of the model family by €263. It proposes an increase in the monthly non-taxable part of the tax base to €480 from next year’s €319.17, an increase in the deductible item for paid health insurance premiums from the current €380 to the level of the current minimum wage, i.e. €480, with the deduction being applied to a monthly salary of €720. Employers also propose to introduce a 10 percent reduced value-added tax rate on all food products, not just on selected ones, as is currently the case. The fourth proposal is to exempt the proposed higher allowance for night and weekend work from taxes and levies.

RÚZ will submit its measures at a special tripartite meeting, i.e. a meeting of the representatives of employers, trade unions and the government, that will be convened on Saturday, December 2.