The snow started falling resulting in traffic jams for Bratislava while roads around Slovakia, including highways, saw many accidents. Meteorologists issue a second-degree warning for Thursday. 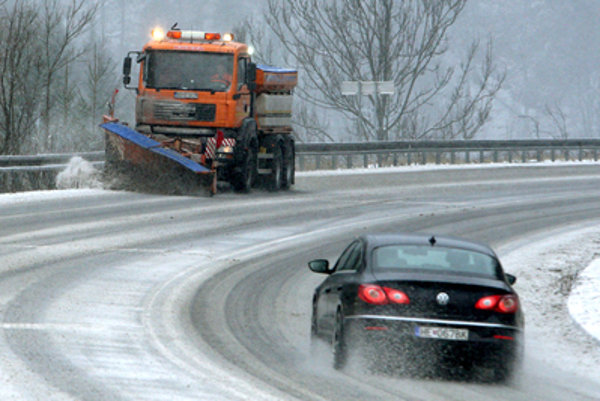 Drivers in the capital had to negotiate heavy tailbacks and traffic jams that started on November 29 when the first snow and then rainfall made the roads wet and slippery. The Waze app and Stella traffic service recorded jams and slow traffic in several places around Bratislava, especially on bridges and main roads.

Bratislava City Council declared a winter emergency state which is part of the winter maintenance programme.

Traffic jams and slow-downs were also reported in Trnava (towards Hlohovec) and between Žilina and Čadca, the Sme daily wrote on its website. Several roads in central Slovakia were blocked until 16:00 on November 29.

The National Highway Company (NDS) announced snow in several districts in central Slovakia and mixed snow-rainfall on the D1 highway between Bratislava and Trnava.

The police closed the Donovaly mountain road pass for vehicles longer than 10 metres and the roads around Brezno were full of snow. Čertovica recorded 3 centimetres of snowfall.

Outlook for Thursday: 5 to 40 cms of snow

For Thursday, November 30, the Slovak Hydro-meteorological Institute (SHMÚ) issued a first- and second-degree warning due to snowfall, with 5 to 40 centimetres of fresh snow expected in various locaitons around Slovakia. The warning is valid until 16:00 on Thursday, the TASR newswire wrote.

In some districts, especially in western Slovakia, snowdrifts may appear on roads.