Out of 128 MPs present in parliament, 53 voted to oust him, while 76 votes were necessary to recall him. 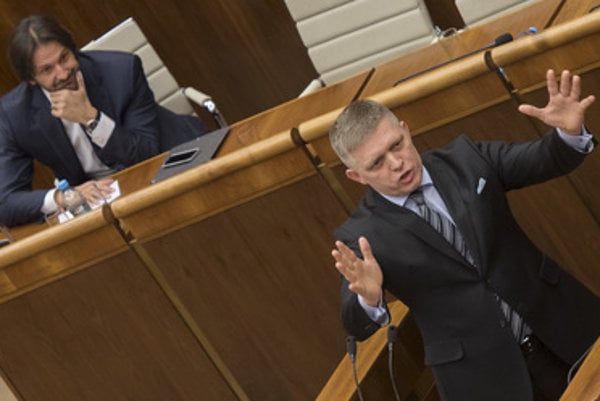 Interior Minister Robert Kaliňák (of the ruling Smer party) will retain his post, since the opposition failed to oust him for the third time on December 6, garnering only 53 votes from the 128 MPs present for its no-confidence motion in parliament.

This time the opposition wanted to oust Kalinak over his repeated failures in the post of interior minister, the TASR newswire wrote.

The vote in the early morning hours of December 6 took place after a more than 13-hour-long debate that began at 13:00 the day before.

All the present MPs from the governing parties of Smer, the Slovak National Party (SNS) and Most-Híd backed Kaliňák, while only Martin Fedor of Most-Híd abstained from the vote. Kaliňák’s removal was supported by the MPs from the opposition parties Freedom and Solidarity (SaS), OĽaNO, Sme Rodina / We Are Family and the extremist People’s Party Our Slovakia (ĽSNS).

Before the vote, MP Jozef Rajtár of SaS said, as the proposer, that deputies would vote for a better Slovakia, by voting for the removal of Kaliňák. The last to speak in the discussion was Miroslav Číž of Smer, who said – as quoted by the Sme daily – that the country has a dramatically low number of people who talk about solutions and that it needs personalities able to understand that it is very difficult to govern a country.

Kaliňák sees no reason to leave

Kaliňák has been considering why the opposition is hunting him for a long time, so he said in the parliamentary plenum, adding that he thinks nothing fundamental has happened in the past four years that would offer a reason to oust him.

“The opposition-sponsored motion calling for my dismissal is weak and contains twenty lies and much demagogy,” the minister said on December 5 at the extraordinary parliamentary session, as quoted by TASR. “There are people here who use lies, ignorance or a lack of education as a working method.”

Kaliňák referred mainly to Rajtár, who initiated the no-confidence motion. The interior minister first called Rajtár a liar, a coward and a cheat, accusing him of boasting about grades and diplomas he does not have (which Rajtár later disproved).

In his long speech, the minister mentioned several examples in which Jozef Rajtár allegedly lied, including his statement that Kaliňák denied his contacts with dubious businessman Ladislav Bašternák, and including the allegation that Kaliňák took money from him. The Interior minister dismissed the hefty fine imposed by the Public Procurement Office for violation of the rules governing tenders, as a mere correction. He then concluded his speech by saying that the opposition wants to cover their own failings with the attempt to remove him.

The opposition referred to the politicians of Kaliňák’s coalition Most-Híd party as accomplices and added that even Smer MPs support him only out of obedience to party orders. The opposition parties complained that not a single MP from among them got the chance to speak before the plenum, and that the only ones who were allowed to speak were Kaliňák himself and Prime Minister Robert Fico, his party boss.

“Kaliňák is one of the best ministers that I’ve met and I don’t understand why the opposition, anti-government media and President Andrej Kiska are so obsessed with him,” PM Fico said in parliament, as quoted by TASR.

Fico admonished the opposition, saying that it does not have any moral right to judge Kaliňák, pointing out that MP Jozef Rajtár’s assistant Filip Rybanič as a bank employee violated banking secrecy by going public with information from Kaliňák’s account. Moreover, according to Fico, opposition figures examined the accounts of several government officials. Fico, on the other hand, refused to explain how he got the information on the tax movements of OĽaNO chairman Igor Matovič.

The Prime Minister continued to slam the top representatives of the opposition parties, such as SaS vice-chairman Ľubomír Galko and Sme Rodina chairman Boris Kollár. He also criticised President Kiska and added that he sent him a bill of almost one million euros for compensation for his private use of the government plane.

“We must thank Kaliňák for that,” he noted. “If we hadn’t buckled down, the outer Schengen border would have circumvented Slovakia,” said Fico, as quoted by TASR, also pointing to his minister’s involvement in introducing the Electronic Marketplace, the ESO public administration reform and election codices, among other things. He stressed that the cabinet stands firmly behind the interior minister.

SaS, OĽaNO and Sme Rodina initiated the no-confidence vote in Minister Kaliňák because of his several scandals and the proposal was signed by around 40 MPs. They pointed out that the interior minister has failed to explain the origin of his wealth, Sme wrote.

Excluding one break between 2010 and 2012, Kaliňák has held the post of interior minister since 2006.