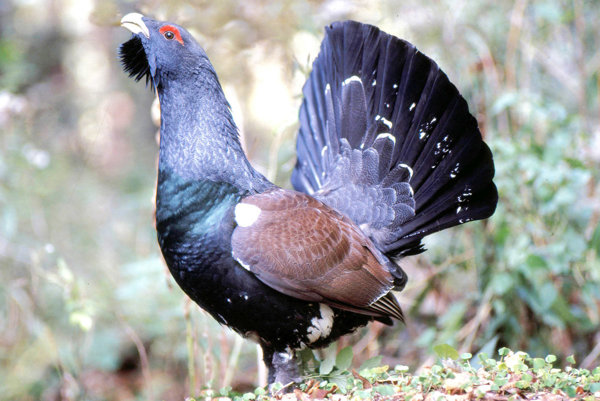 One of the symbols of the Slovak forests, the wood grouse or western capercaillie (Tetrao urogallus) has been dying out for more than 30 years. In 1973, around 3,700 of these birds inhabited Slovakia but the most recent data estimates there are less than 900 left. Environmentalists say the population keeps declining.

Creating protected bird areas has failed to stabilise the population as there is no guarantee that these protected areas will not be logged. In recent weeks, intense logging has occurred in places like the protected bird area on the borders of the Muránska Planina (plane) national park.

“Wood grouse cannot survive in the vast clearings left after logging,” photographer and environmentalist, Karol Kaliský says. A grouse is relatively clumsy and weighs around three kilograms as an adult so in cleared areas, they cannot defend themselves against predators.

Dense forests are not suitable for them, either. To take flight and defend themselves effectively, grouse need enough space. If the trees are too close to each other, the birds can hit branches and break their wings, ultimately falling prey to their predators once again.

Within the debate on logging in national parks, foresters argue that they plant the same number of trees they log. Environmentalists who fight for the salvation of the wood grouse argue that the man-planted forest is much denser than a natural one and destroys the habitat of the grouse despite the re-planting.